Gaming is a childish hobby. If you're a mature gamer, you have probably heard that statement more times than you care to remember. In my case, it has usually been partners who really just wanted to see if they could wind me up during an argument, and usually it worked.

Despite the fact I've grown up in parallel with the game industry, there are still many social stigma that surround videogames, and one of these is that gaming is something you should grow out of by the time you reach your early 20s. Count yourself fortunate if you have a partner who is impassive about your hobby, or even better, encourages you to enjoy it on a regular basis. Rarer still is the partner who loves to join in; priceless treasures indeed, unless fights erupt over who gets control of the joypad and who has to do the dishes. 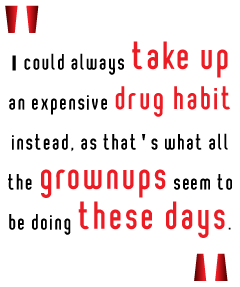 It's not just partners who raise an eyebrow at my continued determination to enjoy my hobby. My mother often has words of disdain ready to spring upon me when she comes to visit. Comments about how my money would be better spent elsewhere are commonplace, to which my normal reply is that yes, I could always take up an expensive drug habit instead, as that's what all the grownups seem to be doing these days. Of course I'd like to hold my mother partly responsible for my gaming fetish as it was she, along with my father, who purchased me a Sinclair ZX Spectrum when I was 11. Yes, that's it: I'll blame my mother - Freud would have a field day.

I wouldn't care if I didn't find the whole thing so damn irritating. Demeaning comments about my hobby used to run off me like water off a duck's back, but the older I get the more vocal my detractors become. This means that I do most of my gaming in secret. I end up feeling like a social leper among certain members of my family, and this must be why I feel so liberated at work when my colleagues and I chat happily about what games are due out this coming Friday.

A friend in my workplace has recently bought The Orange Box and can't wait to play it. His wife is going away for a week, and he plans to get stuck in as soon as she goes. "Why wait?" I suggest. He looks embarrassed and mumbles something about how it would just be easier to do it while she's away. I say nothing in reply and feel an inward empathy.

It's in relationships of the boy/girl variety that the problem manifests itself the most. At best my partners only ever tolerated my hobby, at worst it has resulted in bloody rows and has been used as a verbal stick with which to batter me senseless. Gamers have thick skins though, right? I mean, we can happily gun virtual folk down in the virtual street before stealing a virtual car and paying virtual money for virtual sex with a virtual prostitute. Anyone who can do that couldn't possibly be insulted by a few angry words from an irate girlfriend. Well, in my case (and I suspect, most others), that couldn't be further from the truth. When anything dear to me is the subject of a vicious verbal assault, I feel insulted and hurt. I don't think that makes me a wimp; I'm more inclined to think it makes me appear quite normal. If you prick me, do I not bleed?

I'm at home, showered, dressed and ready for my girlfriend of six years to arrive at my home before we go out for a meal or perhaps go to the cinema. She's running a little late (as usual) so I fire up Portal while I wait for Her Majesty to arrive. Halfway through an intense puzzle, the door opens and in she walks. As soon as she spots me playing a game her demeanor changes and I can see that she's already a little irritated.

Reward Card 2: Quick and to the Pointless Gearoid Reidy 4 Comments