I remember the moment I realized that I was no longer a gamer quite clearly. I was standing in line in one of those gigantic shiny plastic disc emporiums (the ones that used to sell music before we all started getting it for free online), and there was a kid standing in front of me. He was no older than about 13 and he had a load of different cables in his hands.

"Exactly which cables do you need to use 1080p?" he asked the fashionably haired shopkeep. "Neither VGA nor composite seem to work, and if neither of them support it, then why does an non-Elite 360 give you the option to output at 1080p?"

A composite of what?

A barrage of acronyms and technical specifications were then exchanged between the pocket genius and the decidedly emo shop assistant, and I felt like I was in a Tom Clancy novel. All that was missing was C4, MP-5s, WMD, a DMZ and a little A2M.

My TV doesn't even have an aerial!

I slowly felt the ground open up before me, leaving me with my copy of Phoenix Wright on one side and this kid with his casual and frightening audio-visual expertise on the other. I had felt this feeling before.

The first time it was I who was 13. I was at what used to be called a "copy party," where a load of kids with Amigas would rent a hall and just spend the day swapping pirated games and spreading their demos, which were essentially pieces of uninspiring animation frequently accompanied by a warbling midi version of the Lambada while some garish text scrolled along the bottom of the page in the kind of pidgin English that could only arise from a multinational community made up mostly of semiliterate kids. It wasn't Chaucer, but it wasn't that far off; "Gigafux to Quartex" was one particularly memorable witticism. 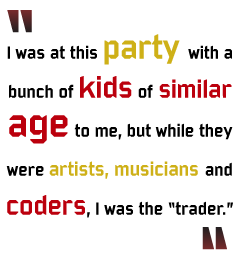 The person who rid me of this foolish notion was maybe 16, and as a result exuded the kind of sophistication and authority that can only fail to impress someone who isn't a 13-year-old gamer. When asked whether he had any games, this font of wisdom in what may well have been gray track bottoms raised his eyes to the heavens and responded, "Games? Nobody trades games ... that's lame." I suspected he was not alone in thinking this, as the ugly 3.5" diskettes I used to receive in the mail had started to contain fewer games and more demos. Clearly the scene had moved on, fashions had switched and I was adrift.

Letters to the Editor: Everyday Gamer The Escapist Staff 0 Comments
Comments on