I wake up at 8:30 a.m. on a rainy Saturday morning in November. No alarm has gone off; my girlfriend, sleeping next to me, provides the evidence. Re-runs of He-man inspired this sort of devotion in my younger years, but now the reality of the work week makes rising early a hated habit, and yet provides a treasured few hours to catch up on my games. Glancing over my selections, it reads like a Best Buy holiday flier: BioShock, Skate, Halo 3, Metroid Prime 3: Corruption and Super Mario Galaxy. I would love to be in bed playing Dementium: The Ward, but I don't have the time to take a chance on a "sleeper" hit. I put in Halo 3 and start blasting through some level on a warthog, the word "blasting" meant only to invoke a visual cue because I have the sound on mute. I do this for two reasons: so as not to wake my roommate and my girlfriend, and so they don't know I am playing videogames. It is a gloomy day with low-hanging, gray clouds, the ground wet with last night's rain. This is great weather because no one will wake up earlier than 12:00 - a solid three and half hours of gaming. 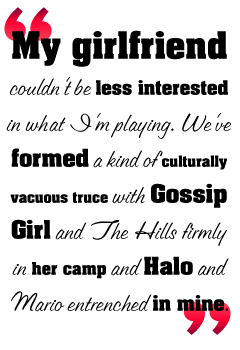 I am in the middle of bringing down a Scarab, leg by leg, when I hear my room door creak. As my girlfriend walks out I am holding down the power button on the controller to shut down the console, never mind where the last auto save was. Because it's Halo, I'm not too concerned with the amount I'm going to replay, but there have been some real tragedies, the most recent having occurred this time last year with Final Fantasy XII. We have been together for five years but I still feel a palpable sense of shame when she sees me playing videogames. On such occasions when she or another acquaintance catches me in flagrante, I make a brief mumbling pronouncement while I quickly fumble to exit out of the game, trying my best to pretend some horrible boredom has driven me to these extreme measures. Let me be clear: I love videogames, but with each passing year it becomes less a badge of honor than a carefully concealed scarlet letter. Fortunately for me, my girlfriend couldn't be less interested in what I'm playing. We've formed a kind of culturally vacuous truce with Gossip Girl and The Hills firmly in her camp and Halo and Mario entrenched in mine. My roommate, who plays NCAA Football religiously and thoroughly, and has a small, albeit unsubstantiated, claim to fame as the dominant NFL Blitz player at the University of Michigan from 2000-2001, usually has questions about whatever game I happen to be playing. I keep my answers as vague as possible; my lame attempt to convince him that I haven't been researching the game since it was announced at E3 two years ago.