I love videogames. I play videogames every single day, unless I've gone temporarily blind yet again from too much Mountain Dew Baja Blast.

I hate multiplayer games. I also spend many hours each day playing them.

Why? Team Butts, that's why. A group of like-minded fellows who have drifted apart geographically but are eternally bound, like Prometheus, by a single mistake of their past: befriending a bunch of stupid nerds. To say I hate them would be an understatement; I loathe their very existence with a strength I usually reserve for myself. The satisfaction I get when my fellow Butts experience the same crotch-punchingly brutal round of Halo as I do is almost worth the torture of playing games with these talentless chobs every single day. Unfortunately, this seems to hold true for the rest of the Butts, and so we have spent years together refining multiplayer gaming down to its core components: a subtle potpourri of whining, cursing and losing.

We take this expertise and travel from game to game, dancing on the razor's edge between bravery and insanity as readily as we breathe and watch anime. We greet the end of each day exhausted, retiring to our race car beds so that we may game again the next day, an unceasing cycle of pain and misery. Will Team Butts ever abandon its foolish pursuit of victory? Only when its members are long dead, far too deep beneath the Earth's surface to receive a decent Wi-Fi signal. 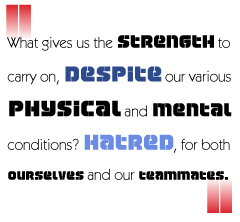 What gives us the strength to carry on, despite our various physical and mental conditions? Hatred, for both ourselves and our teammates. It drives every gamer to some extent, and the hardy members of Team Butts are gamers in the worst sense of the word. We are not so much individual personalities as large, faceless cogs in a machine that runs on suffering and belches oily sorrow. The only distinctions between us are our individual gaming skills and our tolerance for despair.

In a given day, many groups of damned souls, including Team Butts, ply their luck at several digital masochism delivery systems, or "games," as they are known outside of the Butts circle. Your group certainly has their favorites; Team Butts mainly plays newer games, as we quickly grow to hate older fare beyond the limits of reasonable tolerance. The hot game at the moment is Team Fortress 2. It provides the perfect type of streamlined, quick and balanced multiplayer experience we crave. Of course, it also provides the mentally defective player base, which transforms any objective-based multiplayer game into a sobbing festival.

Team Fortress 2 is just one of many games included in The Orange Box. But did you know there's a mini-game inside TF2 itself? It's true! I'm not sure what the official name is, but we of Team Butts like to call it "eXtreme Server Search," and it's an absolute blast. It's integrated seamlessly into the game, too; just go to "Find Server" and enjoy several minutes of looking for a server that isn't empty or full and doesn't contain moon gravity, 8x crits or map rotations alternating between cp_420snipersauna and ctf_yiffydiscofortress. It may be tough, but once you find a winning server you'll feel like you just came in first place on your team. What satisfaction!