I'm certainly not shy of technology, though I wouldn't say I was an out and out technophile either. But every time I cross the threshold of my humble dominion, I do seem to find an extra electronic gadget convincing me of its necessity wherever I go.

It's got to the point now where I feel naked without a phone, MP3 player, camera, PDA, flashlight, radio, wireless headset and a complete backup of my essential files, company accounts, music and a couple of series of Star Trek (damn, I guess I am a technophile after all, Cap'n). This kit can be thinned down if it's just a trip to the shops for a pint of milk or a copy of What Technological Baggage Monthly, but any kind of extended excursion (being an hour or more away from the desk) requires a full personal network of electronic paraphernalia.

Not that I count this as a habitual obsession that needs to be conquered. I'm happy to lug around my porta-office, and on those wonderful, rare occasions when someone casually drops into conversation, "Phew! I wish I had a copy of The White Room by The KLF right now!" or I get an email asking for an invoice from four years hence, I pet my PDA, phone and gigabytes of storage with gleeful charm. And you can guarantee that the next time I step outside the door, there'll be even more potentially vital reams of data stored about my person, or a new electronic leg hair straightener, laser-sighted catapult or can of Shark Repellant Bat-Spray. I need this stuff and thrill to feel its weighty caress across my bent spine. 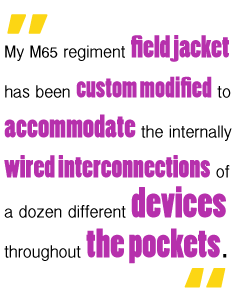 The problem for me isn't the extended personal area network itself; my M65 regiment field jacket has been custom modified to accommodate the internally wired interconnections of a dozen different devices throughout the pockets, sleeves and collar. And, with the extra cables I've bought, it can remain wired up so it doesn't require regular reinstallation. No, this isn't what dogs my technological heels - keeping my mobile self-powered is where the system falls apart.

There was, for a few brief months, a period when my gadgetry and its power sources existed in beautiful harmony. This was just before every mobile phone sported a full color screen, gigapixel camera, 3-D game system and heated turkey baster. My old black and white Nokia managed to function as a terrific, fully operational telephone while lasting for a week or more on a single charge.

Likewise, my grayscale PDA was thin, light and full of electronic life, not being sucked dry by a 400MHz processor, full Windows operating system, 20 trillion billion colors and enough different forms of wireless connectivity to start World War III (although the war would have to be over pretty damn quick, as the nuclear missiles would be falling out of the sky after an hour when my damn battery went flat).

My cassette-based Walkman was a bitch to pry off the battery cover on those rare occasions when the two alkaline AAs went flat, but at least it didn't corrupt my homemade mix tape when it did finally run out of juice. Any device that didn't contain its own built-in power source (of which there was only mobile phones, really) ran on AA or AAA batteries, which were so common you could buy them up from crack addicts selling shit out of a shopping trolley on a downtown street corner. Portable power was a common commodity, and I took it for granted.

The perpetual pillage and rape of the technophile's pockets when it came to buying over-priced add-ons caused my interest in a portable office to wane. Being regularly chased from shops by starving salespeople makes it hard to keep up with techno-trends:

"Would you like an extra battery with your new phone, sir? No, it won't take standard ones, but the manufacturer's is only half the price of the handset when you buy four together."

GDC 2008: Dreamflyer - Scuse Me While I Kiss The Sky Joe 4 Comments

Letters to the Editor: Gadgets The Escapist Staff 0 Comments

Gallery of the Day: 8 Gadgets From the 80s That We Wish We Had DrStrangelove 2 Comments