Why are videogames so effective at conveying a message? At their core, games enforce a ruleset. Mastering the ruleset is the player's goal. The games slowly teach the player how to follow the rules and do it in an interactive, engaging, entertaining way. It makes traditional media seem like simply observing the world through a porthole rather than being immersed in an experience. What is more engaging: Looking at the ocean habitat through the tiny window of a Disneyland submarine, or exploring the world as it surrounds and reacts to you?

That makes videogame development sound like it would be pretty complicated, doesn't it? And, compared to making music or recording a video, creating even a simple game is a complex task. In music and video production there are both novice and professional tools to use, so you are free to learn on the easy stuff and slowly advance to more complex, feature-rich tools.

When it comes to games, however, most of our tools are designed only for professionals. And the actual creation process is somewhat a black box; how does a novice create a game? When I was young, the barrier to entry was more dependent on how much code I wanted to copy than it was trying to figure out the process, but these days development is much more challenging. There are a handful of efforts to simplify the development tools and process, but even the simplest game development tools at this point are complicated.

But what would happen if we could make game development simpler? What if everyone could make videogames?

On the internet, the concept of Web 2.0 is hot. Sharing is king. People are sharing their thoughts on blogs, sharing their pictures on flickr, sharing their videos on YouTube, sharing their music on MySpace and sharing their friends on Facebook. A lot of what you find being shared is not amazing quality, but that's not the point - individual people are able to share their experiences and their perspectives. It's the democratization of the media experience. With so many people creating content and sharing their lives, more people with divergent interests can find like-minded people and find more diamonds in the rough. 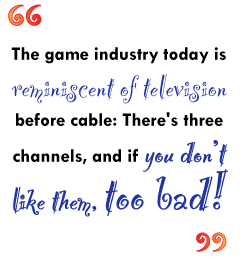 Unfortunately, regarding videogames, the situation is quite different. Making a game is difficult enough. But sharing it with your friends? The game industry today is reminiscent of television before cable: There's three channels, and if you don't like them, too bad! Nowadays, you get 500 channels, most of which you may not care about. But with so many options, you're bound to find something you like. And when there are more channels, there's more creativity, more risk-taking. Would we have ever gotten The Daily Show from ABC? Without cable, would we have ever seen Al Gore's CurrentTV? Link TV? The Sopranos?

Letters to the Editor: Make Your Own Fun The Escapist Staff 0 Comments