Star Wars kid, Chad Vader, Leroy Jenkins, Lonelygirl15. There are people on the web everyone has heard of. I'm quite interested in some of these people. How did it happen? What did they do to win the adulation (or at least bemused interest) of millions the world over?

We begin on our journey with Maddox, a prolific blogger (if indeed you could call him that) who started his site in 1997 and has kept it going strong. While he isn't as recognizable as, say, the crazy frog, he makes up for it by being a much more consistent and accessible celebrity. Although he apparently gets "800-900" emails every day, when I emailed him, his reply was very prompt and polite. He even answered some questions for me.

I asked him about his site's growth. "My site started out with fewer than five readers per month about 10 years ago, and slowly grew by word of mouth to the juggernaut of badass it is today," he says. "I tried to bust out an article once a week. Back in the day I didn't care as much about research or writing in-depth pieces. These days I could spend weeks on one article."

I was anxious to know whether or not Maddox's life had changed much due to his fame, as well. "I quit my job back in 2004," he says, "and now I spend most of my time taking meetings, writing, researching and working on other projects. I've put a lot of work into my online store, which is my primary source of income now - I spend most of my time fighting the system."

In many ways Maddox has achieved the thing that many of us could only dream of: making a living on the internet. Indeed, his site draws in over a million unique users per month, which is absolutely astonishing. So, it's success story for Maddox. He apparently has "huge plans" for the site in the future, too, so he might just stay in peoples' memories longer than most. "Possibly a forum at some point, if I can figure out a way to make it not suck like every other forum out there. Stay tuned." 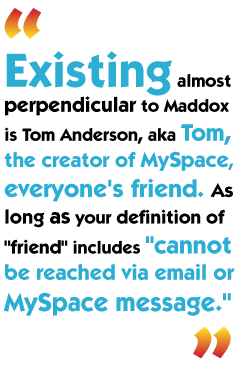 Existing almost perpendicular to Maddox is Tom Anderson, aka Tom, the creator of MySpace, everyone's friend. As long as your definition of "friend" includes "cannot be reached via email or MySpace message." When I attempted to contact Tom for this article, my missives weren't able to penetrate News Corp's iron curtain, but I'm sure Tom's a great guy and is really down to Earth. Regardless, his ubiquity can't be denied.