It was once one of the most popular computer game genres. A little over 10 years ago, the space combat sim was represented by the likes of the Wing Commander series and Star Wars games centered around a certain TIE Fighter cockpit. Nowadays, the genre is moribund. It is pretty much dead in the marketplace, but a dedicated online community of devout fans has been keeping the traditional action-packed space sim alive, thanks to open source. 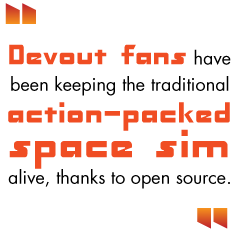 "We're hoping that projects like ours, and the many other high-quality fan projects out there, will help build up the genre again," says Anton Romanyuk, referring to Wing Commander Saga. Romanyuk is one of the developers behind this unofficial sequel to the epic combat space sim. Wing Commander Saga is built upon the FS2_Open engine, which is the open-source version of the graphics engine that ran another classic space sim shooter, FreeSpace 2.

Developers of these open source games share similar passions for the genre. Most are fans of science fiction, and some, like Romanyuk, had childhood fantasies about being a pilot. "A space combat sim is the perfect combination of the two. The speed, tactics and adrenaline rush of a well-crafted sim are something we never get tired of," he says.

For Benjamin Suhr, a developer for Shadows of Lylat, the appeal is the lack of spatial boundaries: "What I really like about space sims is the freedom in movement. It's a completely different experience when you try to escape missiles while you are flying through an asteroid field, [as] opposed to hiding behind a wall from gunfire in a first-person shooter."

Like Wing Commander Saga, Shadows of Lylat is being built upon FS2_Open, and it's also an unofficial sequel to a once-popular game series (StarFox).

So why did the action-based spacecraft sim die out? The developers of these open-source revivals of the genre actually have their own ideas ...

Reason No. 1: The controls were too complicated
Suhr theorizes that the genre started to fade from the marketplace at a point in time when gameplay shifted toward simpler controls and away from realistic schemes, which included those of airplane simulators. Many of the classic space sims can be tricky to figure out how to pilot well.

"Most space sims are more complex [to play] than games like Doom 3," says Suhr. "I do think they are harder to access. Some people prefer it that way, but it really is an obstacle for a lot of people."

The keyboard commands of the open source Vega Strike are mapped so players familiar with the Wing Commander series can get into Vega Strike right away. Unfortunately, this is of little benefit to everybody else.

While more intuitive controls would be helpful for newbies to the genre, Daniel Horn, the creator of Vega Strike, says, "As an open source project, we hardly have time to code up new features, much less in-depth tutorials and walkthroughs."