Wing Commander Saga will also feature missions set over a planet surface, something Wing Commander veterans will remember. "You may just find yourself having the opportunity to descend into the atmosphere of a planet or two as a part of Saga's main campaign. You'll just have to wait and see," teases Anton Romanyuk, founder of the fan-made sequel.

The developers of Wing Commander Saga experimented with other free graphics engines in their attempt to make their fan game, all to no success, until they also discovered the FS2_Open engine.

The team has been working hard to make their fan sequel play as similarly as possible to its original inspiration. "There is an overall ethos to Wing Commander that we have tried to stay true to," says Romanyuk. "So, while we are making Saga in the FS2_Open engine, we don't want people to think, 'Hey, I'm playing FreeSpace with Wing Commander ships.' We want people to say, 'Hey, I'm actually playing Wing Commander, but with the FreeSpace engine."

"Perhaps people like to just admire how cool their spacecraft looks as it glides through the ether," says Romanyuk. He and his fellow Wing Commander fan-game makers definitely wanted to stick with the cockpit view of the original games. "What we decided to go with is immersion. We want it to feel like you are there, actually inside the cockpit of your fighter, although there will be camera controls that you can use if you want to [see] the ship from the outside."

Besides emulating a "being there" sensation, Horn says a first-person viewpoint also offers finer player control: "I can't steer in the third-person view. If I ever have to drive a car in a third-person perspective, please stay off the sidewalk!"

Reason No. 4: Most gamers just don't like the spacecraft sim genre
While this may be due to a combination of the first three possibilities, the developers of Wing Commander Saga, Shadows of Lylat and Vega Strike don't believe the problem could be that the typical gamer isn't into the genre.

"I don't think gamers don't like the genre. There simply aren't many space-sims on the market at the moment," says Suhr. "All it takes is a really big and well-made title. There are many people that usually don't play RPGs but love Final Fantasy."

Says Romanyuk: "It may be an issue with marketing. It may be that many space combat sims these days try to play like a first-person shooter, rather than a space sim." He suggests bringing back the epic storytelling of the original Wing Commander series, to restore the genre to its former status. "It may be that there just needs to be someone who can recapture that perfect combination of characters, story and gameplay. If there is a game produced that will make people feel the way they first did when they played Wing Commander, TIE Fighter, Star Crusader, Elite or any of the major classics, and if it is marketed right, I think we would see a revival." 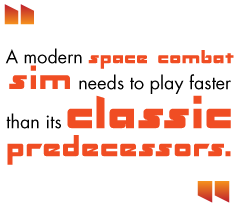 Suhr thinks a modern space combat sim needs to play faster than its classic predecessors, but it "has to be easier to access and it simply has to feature a decent keyboard and mouse control system, 'cause that is what most games use."

Or, perhaps revitalizing the original inspiration behind the genre could be the answer. "I love science fiction because it gives me hope about humanity's future," says Horn. "Look into the sky - that's pretty enticing, don't you think? All those stars and nebulae ... vast, black and unexplored."

Howard Wen is a veteran of the Zylon Wars.