"We owe a great deal to Dr. Freeman - even if trouble does tend to follow in his wake."
- Dr. Kleiner

The opening train ride of Half-Life may include several moments of quiet humor, but surely none of them have the slow payoff like Gordon's Ph.D. in Theoretical Physics from MIT and his "Level 3" clearance. He's got a "big day ahead," says the security guard who greets him at the lab entrance. Yes, he does, the player soon realizes: put on a fancy radiation suit and push a cart a few feet into the dangerous energy beam, then take lunch. Apparently Gordon just barely beat out a chimp with an English degree from Patrick Henry College for the job. But hey, those student loans won't pay for themselves. 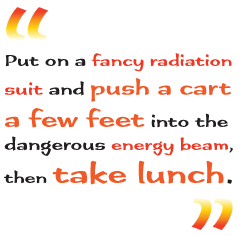 To its credit, Valve's writing staff appears to be fully aware of the humor inherent in Gordon's highly low-tech exploits. In HL2, for example, Barney jokes about Gordon's education while the player performs the difficult task of flipping a switch. But beneath this running gag, the Half-Life series (and its crazy little sister, Portal) betrays a kind of warm ambivalence toward scientific pursuits. As an unapologetic fan of the Enlightenment, I find there's a lot to admire about their implicit statements on the subject.

The Scientific Narrative
Frankenstein's monster kills the good doctor in the end, just as the golem eventually slips from its maker's control in the old Jewish tales. The theme of progress gone awry has often been taken up by pulp fiction - a category happily inhabited by most game narratives. And certainly, Half-Life and its sequels fall broadly into this category. Following Gordon's misguided attempt at manual labor and its disastrous consequences, the Earth is flooded with hostile alien creatures that eventually turn the world into the U.S.S.R., circa 1963. The price of blue jeans no doubt skyrockets.

Yet while past tales of mad science have simplistically implied that there are places man was not meant to go, Black Mesa's experiment doesn't seem to set its scientists aback. The staff that survives into Half-Life 2 - Drs. Kleiner, Vance, Magnusson and Mossman - continue their research, working to learn from the Combine invaders. One has to wonder how the average City 17 citizen feels about that - the same scientists that brought the whole thing on (even if they were prompted by the G-Man) are still playing around with teleportation and zero-point energy fields? Perhaps they figure things can't get any worse, or maybe they just can't find their pitchforks and torches. In any case, the game's storyline doesn't condemn science for its misuse by malevolent forces, which is kind of refreshing.

What Happened To The Last Starfighters? Howard Wen 38 Comments