It was a great day for gamers when Ian Bogost appeared on The Colbert Report recently to promote his latest book, Persuasive Games. Finally, someone's willing to make videogames look good on national television, and it's a guy who flaunts his Mii character when he guest edits on Kotaku. He's a game developer, academic, author and defender of the medium. In other words, he's "one of us."

So as you can imagine, the reaction to Bogost's appearance was overwhelmingly positive on the gamers' side of the fence. I share their enthusiasm for his work, but I can't shake a Colbertian "gut" feeling about one of the topics in his book. Anti-advergames, which Bogost defines as games that protest a product or service, don't work.

Unlike games that promote consumption, anti-advergames offer a message that doesn't jive with the company line. In most cases, they're free games that are playable on the developers' websites. While I appreciate the riffs on ad culture and branding, I'm not convinced they can turn players away from the products these games protest or away from consumerism in general.

Few anti-advergames are actually out there. The news articles I've read tout the genre as an emerging trend, but offer few examples. Bogost's favorite works are Disaffected!, his studio's own criticism of FedEx Kinko's, and McDonald's Videogame, a simulation of the fast food company's questionable business practices, by Molleindustria. Both games expose the companies' inner workings by putting the player behind the counter, and in McDonalds' case, the factory and the South American farmland.

In Disaffected, you're a godlike invisible hand - or maybe a manager - who guides doltish employees around the workplace. They're slow, they're rude and they misplace things, but you've got to work through it and satisfy enough customers to get through each day. Unfortunately, Disaffected rewards deft management with more business. After playing the game for a while, I became quite good at bossing around my pool of idiots. Bogost says the game makes us question underlying labor issues, but I found that a quality supervisor overrides those concerns.

McDonald's Videogame is closer to the mark. In order to succeed, players must destroy rainforests to raise feed, boost cows with hormones, fire slow employees and mask it all with public relations and marketing. It's hard enough to cut a profit the dirty way, but not employing those strategies makes it impossible. 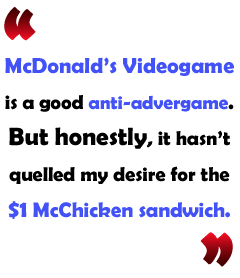 By all measures, McDonald's Videogame is a good anti-advergame. Players witness the restaurant's misdeeds through a set of rules, offering an explanation of the problem unlike any other medium. But honestly, it hasn't quelled my desire for the $1 McChicken sandwich.

I'm not alone, either. "I'm sure [there's] a political message in there but anytime I play it I just get a craving for burgers," said one commenter at Edge magazine's blog. Another commenter at the blog We Make Money Not Art said it works well as viral ad for McDonald's. Even Patrick Dugan, who interviewed Molleindustria developer Paulo Pedercini for Gamasutra, admitted to desiring fast food after playing the game for an hour. Was this an intended side effect?

Subversion of advertising, known sometimes as anti-advertising, adbusting, culture jamming or just subvertising, is a decades-old practice. The Billboard Liberation Front "improves" road signage with slogans such as "Think Doomed" instead of Apple's "Think Different." Adbusters supplements its magazine with parodies of popular ads. Ji Lee's Bubble Project encourages people to stick speech bubbles on street ads to be filled in later with "off-message" ideas.