Guybrush has reached Monkey Island. After wandering for a while in the afternoon heat, he finds a path ascending the side of a plateau, which he climbs. The plateau is bare and high. In the distance, the jungle's carapace unfurls toward the sweep of the white beach, beyond which the sea heaves and sparkles.

An old man - Herman Toothrot, who will one day transpire to be Guybrush's grandfather - shambles up behind him and says, "I never get tired of this view."

So what does it look like? Well, there are 32 colors on the screen, artfully distributed to create the impression of depth and texture. Objects in the foreground are reasonably detailed, but those in the distance are hazy, and everything on the screen is made up of clearly discernable blocks, like a LEGO sculpture. While nobody could possibly mistake the scene for life, it might pass for an impressionist painting through fanciful eyes.

By modern standards, the Amiga A500 on which I played The Secret of Monkey Island was a weakling, some 20 times feebler than my mobile phone in terms of CPU speed, and although this method of comparison is far too crude to do Commodore's ill-fated home computer justice, it should give you an idea of how far we've come to reflect that it's possible to play Monkey Island on an iPhone while still using that device for a range of other applications. By the same crude method of comparison, the PS3 is well above 400 times more powerful.

Cinema has followed the same path. Early attempts at creating dinosaurs and monsters look risible when held up against, say, Peter Jackson's King Kong or Steven Spielberg's various dinosaurs, and it's often only through context that we can tell real from fake. We know that there are no such things as giant spiders and hobbits, so the fight between Frodo and Shelob in The Return of the King can only have been manufactured. It would be almost impossible to tell otherwise. 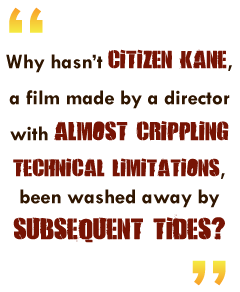 However, no matter how good special effects get, the development of cinema is seldom considered to be one of steady improvement. Special effects certainly contribute to certain films' success, giving sufficiently financed directors huge expressive potential, but nobody would suggest The Lord of the Rings trilogy were better films than The Third Man. Indeed, most critically regarded films use CGI special effects sparingly, and the relationship between critical - though not necessarily commercial - success and CGI usage is weak. Of the top 20 films of 2007 on Metacritic, only Ratatouille and The Bourne Ultimatum could reasonably be considered special effects-driven.

Critical Miss: What We Want The Wooster 71 Comments

No Right Answer: "Greatest" Movie Ever Made Firefilm 48 Comments