I'm reading the post-apocalyptic workout with one side of my brain and thinking of violent revolution with the other.

In the coming days, after Jimmy Hoffa returns from Hades to become President or Rarotonga develops the Bomb, there will surely be things we need to know, or we will die. Like bow hunting, skinning, which mushrooms to eat and which pustulating skin conditions to avoid coming into contact with. Nina Bargiel has compiled a list, and I'm following her progress on it. Like me, she's pretty much starting at zero.

It's a shame, because if I were handier with an antelope's thigh bone and better at swimming, I'd be whomping the testicles of Mr. Russ Pitts, Acquisitions Editor of The Escapist, right now. "Videogames and learning," Russ. Twelve hundred words. You must have been howling into your coffee as you passed that one out. It looked so easy. Find a kid with bad grades and good StarCraft abilities. Show how his vile little mind adapts to strategic warfare easier than reciting multiplication tables. No problem. In the bag.

Videogames and learning is a book, Russ. Or 10 books. A film. A blood-soaked revolutionary saga with the guts of treacherous editors strewn all over it.

It's almost enough to make a man go back to bureaucracy. But not quite.

So here's the deal: I found a way to wrap up more than 10 trillion words of debate and argument and desire and vision into your filthy little package. I discovered what's wrong with the world and what could be great. 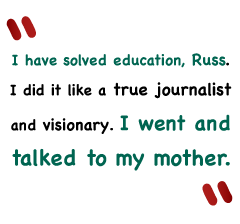 I have solved education, Russ. I did it like a true journalist and visionary. I went and talked to my mother. And I found your bloody revolution right there.

Dr. Helen Anderson is the Academic Director at Manukau Institute of Technology, a set of concrete towers in the vastness of South Auckland, New Zealand. She came up through bridging education, the hardscrabble world of taking people who didn't finish high school and getting them ready for college degrees. She uses words like "potential" and scowls at words like "failure." She showed absolutely no interest in computer games when I was a pimply, pain-in-the-ass teenager, but now views them as a developing research area.

The Escapist: So, we've both, separately, come to the conclusion that computer games and learning is a bit of a red herring. Why?

Dr. Helen Anderson: Because the direct value of computer games in learning environments is obvious to just about anyone who looks at it - certainly, for example, to readers of The Escapist. Something that can simulate rich, complex environments at staged levels of difficulty, offer continuous feedback, allow you to "fail," then learn from that - sure. Works well for everything, from putting business students in front of Capitalism to young sportspeople in front of Madden or Rugby.

HA: It's not bad. It's great. And obviously it's getting a lot of attention, well beyond the old back-and-forth about "educational software." But there's another level to all this. Computer games in classrooms have been here since at least the early '80s, to varying degrees of usefulness, but what is it that games actually do? What's going on at a gut level - the DNA of this learning process - that makes games work so well when compared to other teaching/learning methods?