After two days, five tanks of gas and 1,300 glorious miles of interstate, I have arrived at Gamer Shangri-La. A mythical place where DS Lites are plentiful, Spore has been playable for months and The Orange Box was the best-selling game of 2007. A place where some three dozen devoted employees commute to the office by hoverboard, where "work" is really just a nine-to-five LAN tournament and each day concludes with an after party that makes E3 seem like bingo night.

I have arrived at The Escapist.

Of course, reality rarely lives up to our expectations - or delusions, in my case. Over the past couple weeks as the newest member of Team Humidor, my crude, ill-informed notions about game journalism have strained under the weight of actual experience. Long-distance relocation is disorienting by itself, but moving into a new industry, especially one as idiosyncratic as this gaming business, presents challenges that the rigors of long-term unemployment have done little to prepare me for. Foremost among them: figuring out what the hell I'm doing.

Simply explaining my position to inquisitive friends and relatives back home has been an ordeal. For those who haven't picked up a controller since Pong, working for a "gaming company" could mean anything from manufacturing chess sets to orchestrating offshore gambling rings. Those savvy enough to have played a few games of Wii bowling seem puzzled that one could pursue a career writing about games without actually reviewing them - an understandably skeptical opinion. For casual acquaintances, where the question is asked out of simple courtesy, I've opted for a more abstract answer: I work for the internet. At some philosophical level, it's probably true; more importantly, it has yet to result in a follow-up. 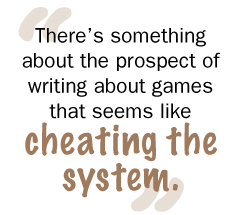 For my gamer friends back in the Midwest, the sudden career change is slightly less bewildering. There's something about the prospect of writing about games that seems like cheating the system. Artists, designers and programmers have to endure the pressures of budgetary constraints and release schedules, suffering through back-to-back 80-hour weeks without overtime pay to polish a game for mass production. Entire websites have sprung up to document this white-collar indentured servitude. And what do game journalists have to put up with? Press passes, beanbag chairs and all the free stuff publishers can throw their way.

This last assumption has been particularly tough to dispel. As an outsider to the industry whose only window into the tenuous relationship between PR companies and publications has been a few Penny Arcade posts and snippets of bygone E3 coverage, I vaguely expected The Escapist to be inundated with free games and useless swag: T-shirts, key chains, coasters, you name it. It's been two weeks, and I don't even have so much as a glossy press release to show for my newly acquired credentials. Turns out, someone has to know you exist before you get the full PR treatment.

But beneath the reputation for freeloading is an underlying fallacy of game journalism: that we're basically getting paid to play games. While it may be true for more traditional gaming sites, the reality I've encountered here at The Escapist has been both more mundane and more rewarding. Between trying to adjust to a new city and insinuating myself into the finely-tuned Rube Goldberg machine that is The Escapist's editorial process, Mass Effect has been collecting dust. Even at a gaming company, entertainment takes a back seat to more practical considerations.