"Litigation is like a one-on-one FPS deathmatch. Maximizing your strengths, gauging your opponent, understanding the environment (the judge and jury vs. the level design) staying aware on every level and doing your best to use your opponents strengths against them, all within a set state of rule sets; winner take all. In fact, one of the reasons I was able to kick the trial habit (and yes, that sort of intense competitive activity is addictive) was though channeling my combative behavior into my clan and its competitive FPS play online." - Tom Buscaglia, game attorney

"It's funny, when working 'on spec' for a licensed game, it's a lot more like playing Tetris; fill the holes with the blocks. You make sure you hit the high points of necessary gameplay and buzzwords and you make sure you're always servicing the license. Otherwise, what's the point of doing a license? When designing your own IP, it's a lot more 'wouldn't it be cool if' sessions. You sit and come up with ideas, prototype them, play them, iterate, rinse/repeat. Either way, I find myself constantly 'playing the game,' whether it be license, original IP or established franchise. When I say 'play,' I don't always mean with controller. I mean, running through it in my head, essentially 'playing' aspects that aren't even completed or implemented. I think it's necessary to constantly play the game in your head as if it's done, otherwise you'll never get to 'done.'" - Tony Barnes, Reflexive Entertainment

"I enjoy making games more than playing games, and I suspect most professional designers feel the same way. In fact, for kids who say 'I want to be a game designer when I grow up,' this distinction is key for telling the real future designers from the wannabes. The ones who really want to be a designer are spending their spare time making games, not just playing them. The ones who still think that designers just come up with an idea - 'Let's make a game like Castlevania, but with lasers!' - and then go back to playing games full-time, are the ones who just play a lot and don't know the first thing about design." - Ian Schreiber, independent game designer and Adjunct Professor at Columbus State Community College

Patricia Pizer, a senior designer at Disney Interactive Studios, prefers to design in a team of two. "Designing at its absolute peak is a one-on-one process. When I look back at my best days as a designer, the bulk are myself and one other designer." In saying that, however, Patricia remembers one incident where the process of design was trumped by a surreal moment of play. "I must also include the day the [42 Entertainment] team went out to field test the Tombstone Hold'em rules. On the way out to the cemetery, I asked my car-mates, 'What do you consider too outrageous to do in a cemetery?' Categorically, lying down on someone's grave won hands down. Within two hours, I had photos of every one of them lying on graves. That's good game design!"

Design, like play, always feels most natural and fun when you're with others. Just as a move in a game influences the next, so too does the designers' back-and-forth interaction influence the outcome of game design. While it can be played solo or co-op, it can be competitive as all hell, too. I've worked on pitches that were literally make or break for landing IPs or funding, and all the while I was acutely aware that I wasn't the only one furiously figuring out a concept, a pitch and a prototype design. It's head to head, team vs. team, not unlike the massive guild-vs.-guild battles in MMOGs, and often there's millions of dollars at stake.

Unfortunately, we have PvP matches, too. The stories are legend, and all game developers have them. Instead of pulling together to make a game, the team pulls itself apart, and the game design game becomes one of politics and manipulation, pitting one group, one person, against another. The .plan flame wars of the 1990s have recently become open, painful letters for all to see. 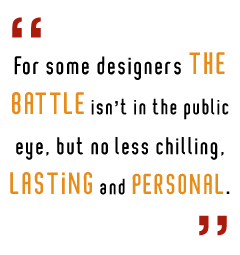 For some designers the battle isn't in the public eye, but no less chilling, lasting and personal. I've known more than one designer who sat in his office aware that the whole future of the company rested on his shoulders. While every bad game has the potential to shut down a company or a studio, usually it's not quite so apparent and direct as this: If the publisher gives the project the green light, the company lives. Otherwise, they're all out of jobs, and it's Game Over circa 1981. Back then, we had real consequences. If your team fails in Wizardry, your whole group gets lost in the dungeon, period, until someone comes down and gets your sorry, dead ass. The recruiters are at least more expeditious about it.