I remember watching one such designer working on a live-or-die proposal. As I grabbed a cup of coffee, I asked him, "Can I help you with anything?" He told me no, and said he'd be all right. He looked like a man walking toward his executioner, and ultimately, his proposal was the last the company would write. I remember feeling then much like I feel now. He was driving off a cliff. No pressure, buddy, just keep pressing the gas.

When Wizardry 8 hit that same cliff, thank goodness for all of us, it soared, and the feeling we got when people not only liked it but awarded it was something not all designers get a chance to feel. It's better than the endgame of any game I've ever played. Better than Risk, better than Settlers, better than the first time I beat Civilization or the last time I beat Ratchet & Clank.

It's a good thing, too, because most designers can't really play the games they make. Bruce Nesmith, a designer at Bethesda, is one of them. "I suspect this is true throughout the industry," he told me. "Once I've made a game, there is no joy in playing it. Or at least the joy is a shadow of what I get from playing someone else's game. Part of enjoying a game is discovery and surprise. Having made the game, there is none of that. Mastery is another principle pleasure of gaming. After testing it for several hundred hours, I've mastered the whole damn thing." 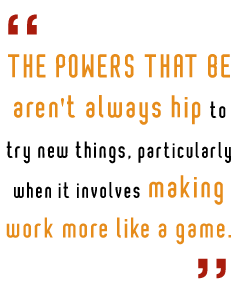 For Ian Bogost, a designer at Persuasive Games, design or play, it's all fun of different degrees. "I feel like everything is a game - this idea of finding the processes in things and trying to understand how they work and taking advantage of them. So maybe it's not that surprising to me to find game design like a game." At the same time, Bogost isn't sure which he likes more, playing them or making them. "That's maybe because the latter is work with deadlines and budgets and stress. It's still play of course, if we understand play as the exploration of constraints. ... Budgets and the like are just constraints." But budgets aren't nearly as much fun.

Morgan Jaffit, a designer at Pandemic Studios, focuses on the player experience, but not just in the obvious way a designer would. Rather, Jaffit extends the process of design to designing the design experience.

You're Not Allowed To Do That Richard McCormick 30 Comments