After all, says Jaffit, "design and leadership are very similar skill sets, and by utilizing the same set of skills you'd use to create a great player experience, you can develop a great experience for the people making a game." He's not just saying it. He's implementing it, too. "I've been taking this to heart over the last year," he told me. "The seed of the concept came from Steve Jackson in one of Harvey [Smith's] GDC roundtables. He suggested that the Valve model for getting a new ability - show it being used, give it to the player and require its use to overcome a challenge while having no pressure, use ability in light pressure, then expect mastery - would work equally well with teaching people new skills in a work environment. From there, it became really clear to me that the same sets of skills we use to make games would help make things enjoyable for the team - and vice versa. Concepts from leadership then bridge easily across to development. If people don't know what they need to do and why it's important, they won't be happy, regardless of other factors like great office environment, pay, etc. If they don't know what to do and why, all the shiny in the world goes by the wayside."

The same ideas might not fly elsewhere, though. The powers that be aren't always hip to try new things, particularly when it involves making work more like a game. "I'm fortunate in that I can focus almost exclusively on making sure making this game is a great experience for the team," Jaffit added. "The people directly above us are very supportive of what we're doing, in concept and in execution, and are right behind us. Not to say that we haven't earned those resources, to briefly move to an RTS metaphor." 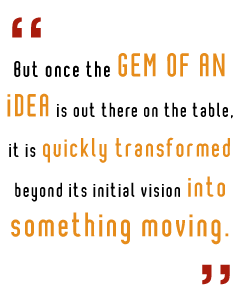 But is design really group play? Does player experience translate to design experience? Does it really work that way? I am reminded of a quote from my favorite book, Steinbeck's East of Eden: "Nothing was ever created by two men. There are no good collaborations, whether in art, in music, in poetry, in mathematics, in philosophy. Once the miracle of creation has taken place, the group can build and extend it, but the group never invents anything. The preciousness lies in the lonely mind of a man." Maybe Steinbeck is right. But once the gem of an idea is out there on the table, it is quickly transformed beyond its initial vision into something moving, dynamic and playable. Others poke it, rip it and add to it. Sometimes, maybe even many times, it is transformed well beyond its initial vision and is no longer even recognizable as a child of the idea. I have often said that the difference between a junior and a senior designer is this: The junior designer completes her design, proud, pleased and confident in the work. The senior designer does the same, but immediately goes in search of another designer to find the critical design flaw she knows is there but can't see. It takes two or more to make design good.

Group play is a requirement of design, a delight of design, whether it comes in seconds after creation or in the weeks and months to follow. Maybe that's what Steinbeck meant when he suggested that it happened in the "lonely mind of a man." The loneliest I have ever been was when I was alone with my idea without another designer, programmer or artist to make it real.

Brenda Brathwaite is a contract game designer and professor of game design at the Savannah College of Art and Design. She has been in the game industry since 1981 and has shipped 22 commercial titles. She is an avid player of games and is currently spending an absurd amount of time studying them.

You're Not Allowed To Do That Richard McCormick 30 Comments