Oddjob, bowler-hat chucking henchman in the classic Goldfinger, is criminally short in comparison with Goldeneye's other playable characters. Shots that would otherwise slam into the face of a normal sized adversary will happily sail over his primitively shaped head. 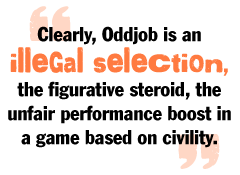 Clearly, Oddjob is an illegal selection, the figurative steroid, the unfair performance boost in a game based on civility. My friends and I, we never touched him. You can even do blood tests to check.

Thrust into the strange new world of dormitory living, I sought refuge. Clustered around a small portable television, I found kindred spirits, drawn, like myself, to the noble art of GoldenEye. Spare controllers beckoned; I grabbed one and joined the fray with the comparative strangers. Would this work? Reassurance came immediately:

I was home! Any anxiety about my new start melted away. These people weren't strange freaks. They understood GoldenEye, so I understood them. It became more than a game; it was a social bridge between almost total strangers, a reference point so solid that it persisted despite other differences.

My second year of university began in a shared house. Living with four other males ensured that our extensive combined console collection took pride of place under our TV. Never short of something to play, and with minimal requirement to actually make it to class, concepts of "bedtime" became blurred.

This late-night lifestyle resulted in the development of another passion: American football. Feeds of the week's games arrive live in the U.K. The time delay across the pond means coverage starts around 1:00 a.m. and finishes close to 5:00 a.m.; perfect for the nocturnal student viewer.

Due to the late broadcast and the game's relative complexity, football remains a fairly niche market on my side of the Atlantic. Hungry for further material covering our fresh new fascination, my housemate and I tracked down what we hoped would be a beginner's guide to the sport: Madden NFL 2005.

While not exactly operating as an introduction to football, the Madden series successfully piqued our interest to the point where vast swathes of my memories from this period are dominated solely by endlessly looping commentary from the titular Mr. Madden himself.

"Franchise" mode took over our time, both of us leading a team on a two-player saga that stretched into double figures of fictional years. We organized a successful format - both of us would play our team's games, and the other would take control of the opposition that week. Games would regularly last an hour. On a good day, we'd get through five games.

Letters to the Editor: Group Play The Escapist Staff 0 Comments
Comments on