As our experience grew with the game and the sport, we developed more complex approaches to achieving victory. Idle speculation one day resulted in the discovery of a near-foolproof way of blocking punts; we quickly vetoed this practice as games descended into madness.

At the time, our intensive sessions seemed fairly simple, the repetition of a format that worked well for us. In hindsight, however, I realize just how complex the social edifice we'd created was. Those who did observe us in this environment were invariably left confused, as if they'd been spoken to in an entirely new language, yet to my housemate and me, the whole enterprise was totally normal. Through a mammoth amount of time spent in the game, we had invented, developed, used and then later dumped an entire lexicon of phrases and terms - an effort staggering in retrospect, but so simple at the time.

If my Madden experiences are the control group, the Pro Evolution Soccer series could be considered the true experiment in the U.K. Essentially ubiquitous in student houses and apartments across the nation, Konami's simulation is firmly implanted in the minds of thousands, thanks to a blend of careful marketing and the U.K.'s soccer obsession.

The vast majority of student abodes I've visited have had some form of arrangement for playing the game, be they casual gamers or rabid fanboys. Some merely have their consoles plugged into a main television; one particularly memorable visit to another house saw us open the front door onto a darkened room, where a sole figure sat playing, naked but for boxer shorts, engrossed so totally in his game that he did not even acknowledge our presence.

For my previous house, this one-TV approach was not enough. We secured a second TV, with the sole aim of using it for the Pro Evolution series. It sat next to our existing screen, consistently mute (commentary is a needless luxury), yet omnipresent, switched on come rain or shine, come house party or quiet night in. 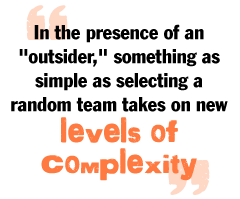 Discussion extends to all aspects of the game, covering apparent trivialities in extreme detail. That others away from your immediate social group may well have decided on something very different to your own selection must also be considered. In the presence of an "outsider," something as simple as selecting a random team takes on new levels of complexity, as unspoken protocol forces you to consider several factors. Even among my friends, bitter arguments rage over the correct way to go about this action. We all agree that each player should get three chances at a selection, to avoid getting a really bad team, but even that's contested.

A true foundation of our home, it was something about which everyone had an opinion, and something on which consensus had to be reached - more so than the washing up or emptying the trash. Even the moniker chosen for the game went through rigorous testing processes as we attempted to integrate new options into our vocabulary - "Pro Evo" remains classic, but had to withstand challenges from usurpers like "Pro" and "PES."

Pro Evolution Soccer, the multiplayer behemoth, has spawned countless variations in specific house rules and styles. Almost a social tool rather than a game, its assimilation into the living rooms of thousands proves that, placed in an environment of cohabitation, games can and have become more than simple pastimes. They aid developing relationships and provide a sanctuary for those who fear they have nothing in common.

Richard McCormick is a freelance contributor to The Escapist.

Letters to the Editor: Group Play The Escapist Staff 0 Comments
Comments on