Almost 10 years after the release of Blizzard's StarCraft, the exclamation "kekeke Zerg rush" still causes gamers familiar with that finely honed horror of micromanagement to cringe. Similarly, mentioning the button combination "BXR" to a veteran of Halo 2's online play will evoke either a gleeful grin or foaming at the mouth. These infamous pariahs of tactics and others like them are gathered under the umbrella term "exploit," two ubiquitous syllables that echo throughout the gaming world.

I would like to suggest a few more colloquialisms that could huddle under that umbrella, namely "shorthopping" and "wavedashing." In Nintendo's Super Smash Bros. Melee - a more kid-oriented fighting game featuring multitudes of characters that have appeared in Nintendo games - these are considered exploits of game mechanics that allow a range of near game-breaking abilities, such as abnormal speed, de facto invulnerability and the much scorned "cheap kill."

Specifically, shorthopping and wavedashing take advantage of Melee's jumping mechanics. When you tap the jump button softly enough, the character will jump only half the distance of a normal jump - a "shorthop." With enough practice, a player can deliver a rapid, difficult-to-counter succession of aerial attacks; this is called SHFFLing, or "shuffling," and shorthopping is integral to it. Many highly competitive characters, such as Fox, have aerial finishing moves. Shorthopping allows a skilled player to access such moves in a split second, circumventing the game's balance. Wavedashing calls on the player to perform an aerial dodge into the ground after performing the same slight jump. For many characters, wavedashing is the fastest possible method of movement; they can literally run circles around a character employing a standard run, while retaining access to their full complement of ground attacks and defenses. 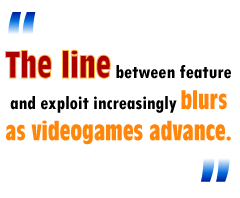 The line between feature and exploit increasingly blurs as videogames advance. To make a judgment one way or another on a potential loophole is to enter a losing proposition, and to waste an exorbitant amount of time. What's most intriguing is how the use of an exploit changes a game's atmosphere; sometimes predictably, sometimes not.

There's not much to be done after being "unfairly" dominated in a multiplayer game. Players don't often expect to have an exploit utilized against them, so they consent to combat on a basis of faith that their opponent will refrain from using a tactic the majority considers unfair. The anonymity the internet affords limits the number of possible reactions and the extent to which an injured party can lash out against those that have wronged him. In conjunction, the social detachment that goes hand-in-hand with internet citizenship lessens the grievousness of the offense; it's just a game after all, right?

But things change when the source of your unfair defeat is sitting next to you. A group of close friends and I unexpectedly gained firsthand experience with this when we hosted a single elimination two-on-two Melee tournament. It was the fourth in a series of weekly gatherings where reigning champions defended their titles. Respect was gained, and money exchanged hands. Not only did we attract the gamer-academic shut-ins with an amazing sense of self-deprecating humor and superfluous hyphen use, but we regularly wound up with the same people that might band together to watch a sports game on an idle weeknight. It was attractively egalitarian; everyone paid a couple of dollars to get in, everyone had a shot at our meager Grand Prize of 20-something dollars and everyone tried their hand at videogames with a smooth learning curve. Not only were we bringing gaming to the People, but our tournaments had become Something To Do among our immediate neighbors and other denizens of our college residence hall. We were responsible, in some small way, for bringing those around us closer together.