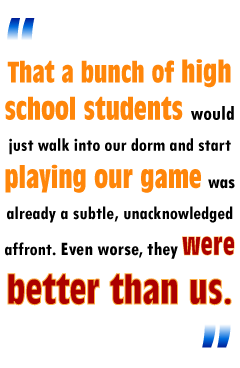 When six local high school students walked in while we were setting up for the tournament and immediately began practicing their wavedashing in a warm up match, it was an opportunity to witness a display of xenophobia on an extraordinarily small scale. That a bunch of high school students - emissaries from the outside world - would just walk into our dorm and start playing our game was already a subtle, unacknowledged affront. Even worse, they were better than us. We had only one regular Melee player that could wavedash adequately, and he refrained from using the tactic in deference to our lesser skills. Immediately, we realized that these six intruders were going to mercilessly beat all comers into the ground. Moreover, there was nothing we could do about it.

The call went out among the organizers to find the proper method of polite expulsion, but all efforts were to no avail; our tournament was open to all and moderately publicized on Facebook. Nowhere had we bothered to clarify that those who did not attend our school were not welcome. A few times, a voice cited some obscure and shaky ordinance that high schoolers were not to be in the residence hall, but it was to no avail. None of us had the guts to try and oust the six arrivals, peacefully or not. And they had paid to play, just like everyone else.

The two most skilled of the six had to leave before the tournament started, leaving the lesser four. They beat all of us anyway. While only one of the four consistently wavedashed, all of them utilized shorthopping in conjunction with mastery of common competition characters. In short, they took winning much more seriously than we did. That ruthless dedication allowed them to win without breaking a sweat, but it left us wondering whether it was appropriate to the setting we'd created. I was torn; we'd been invaded, but it was a pleasure to watch players that could take a classic game like Melee to an unprecedented level of play.

What the victors did was, ultimately, entirely fair; they worked within the game mechanics to stamp out all possible competition and guarantee a win. We were hosting a tournament, and they used techniques that are not only allowed in tournaments, they're expected. However, our tournament straddled the line between friendly get-together and serious competition; when the six contenders showed up, the tournament automatically took a sharp turn toward the real deal.

In a way, those six were at fault for putting an unwarranted edge on the festivities. But it was just as much our fault for failing to clarify the boundaries of the tournament and for giving in to our xenophobic tendencies. Our incensement gradually faded, and when it came time for the final face off between the four remaining high schoolers, at least some of us were cheering for our favorites. With the indignation a gamer can sometimes experience after encountering an exploiting player on the internet, one might expect a comfortable, couch-based multiplayer environment to be irrevocably tarnished by exploits. But things aren't so clean and predictable, especially when you can see an exploiter is just another person who simply wants to win more than you do.

Steven Croop writes obsessively to distract himself from his courseload. He was last seen loping off into the forest, shouting "nevermore!"