One of the more impressive games released last year was Beyond the Red Line. This action-spacecraft sim is based on the modern-day incarnation of the TV series Battlestar Galactica. Beyond the Red Line puts the player right into the cockpit of a Viper, the show's signature starfighter, and into a dynamic storyline that expands upon the Galactica universe.

The game looks and sounds top-notch, like a AAA release. But it's actually a mod built upon the FreeSpace 2 engine. It was created by fans of the show, and remains in continual development.

Beyond the Red Line is not officially sanctioned by the producers, studio or anybody else connected with the series. It is a testament to what a community of determined gamers can do: create as well as play together.

In January 2005, after the first season of Battlestar Galactica ended, Napoleon Nicdao rallied fans of the show within the FreeSpace 2 modding community, Hard Light Productions, to create a "simple" mod, which over time evolved into the standalone Beyond the Red Line. A 3-D graphics model artist, Nicdao used his talents to recreate the spacecraft seen throughout the show for the fan game.

The Escapist: What is it about the action-spacecraft sim genre that you and the members of your team find appealing? Besides the television series upon which it is based, were there other games that inspired the design and game play of Beyond the Red Line?

Napoleon Nicdao: Many of us grew up during the golden age of that genre, playing classics like Wing Commander and the X-Wing series in the early '90s. Their fast-paced gameplay, freedom of movement and immersive sci-fi storylines made for visceral gaming experiences. FreeSpace 2, many of us still feel, is the last classic of the dwindling genre. 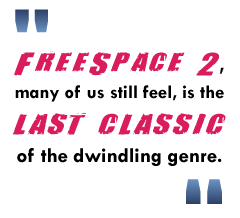 Over the years, as the computer gaming technology and the genre evolved, the core of its appeal remained the same. These games influenced and definitely inspired Beyond the Red Line's design and gameplay.

TE: What's the biggest challenge you guys had to deal with when developing Beyond the Red Line?

NN: The biggest, without a doubt, is managing a team of volunteers. We all either have jobs or are in school. Beyond the Red Line relies on the time and dedication of its members, but, most importantly, the love for both Battlestar Galactica and gaming.

TE: What technology and gameplay elements in the game are you most proud of?

NN: Thanks to the many skilled coders behind the FreeSpace 2: Source Code Project, there are many features that we are proud of. From graphics improvements that rival today's games to the use of alternative interfaces, like head tracking, Beyond the Red Line is always pushing the software and technology to enhance the experience. The gameplay at its core is still a space sim, but recent developments now allow us to expand further beyond that.

TE: Why do you think gamers today don't like the action-spacecraft sim genre?

NN: I think there are many factors that attribute to the genre's small presence in the industry today, such as the dominance and over-saturation of first-person shooters and the sci-fi genre's current minority [presence] in mainstream media. We intend to carry the torch [for] other fans of the genre.