TE: To the layperson, it might appear that action-spacecraft sims aren't as graphically challenging for a game developer to create, compared to a game set on Earth or another planet environment. Outer space is essentially blackness, punctuated with stars and planets, and, therefore, maybe gamers today don't find this setting visually appealing. What are your thoughts about this observation? Is there more to the technology that goes behind an action spacecraft-sim than simply rendering stars, planetary bodies and starships?

NN: There is much more to game design than just the backdrop where it's set. It's how it's used and what it's populated with that makes it engaging. The space arena allows us to put more emphasis on the foreground elements that populate it, and we have not ruled out the possibility of expanding that arena planet side. There is also much more freedom with the interaction of these elements within a zero-G environment. Graphics and technology is important to us, as you can see in our attention to Beyond the Red Line's quality, but story and game play variety is even more important to us.

NN: Beyond the Red Line allows first- and third-person points of view of the action, each having its own benefits in aesthetics and practicality.

I can only speculate that the third-person point of view preference used in that Wing Commander title was chosen to best suit its gameplay, which is not one of a space sim. I think there is also a stigma of over-complexity that the first-person point of view space sim genre conveys, and many gamers today avoid the steep learning curve, which Beyond the Red Line does not have.

TE: What are your ideas for how the traditional action-spacecraft sim genre could be revived for gaming audiences today? 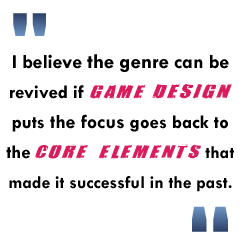 NN: I believe the genre can be revived if game design puts the focus back to the core elements that made it successful in the past by presenting an immersive and dynamic story executed with diverse gameplay. Many games today put too much stock in graphics and technology with a gameplay experience that suffers from mediocrity. The balance between the two must weigh more heavily on game design than graphics presentation.

TE: Let's say I'm one of those gamers that don't play action-spacecraft sims, nor am I a fan of Battlestar Galactica. Why should I play Beyond the Red Line?

NN: The Beyond the Red Line team feels that the space sim genre suits the subject matter best. Considering that this is a profit-free product, we have nothing to prove to the industry or to the masses, for we are doing this for ourselves.

Howard Wen fondly recalls the time when "Starbuck" was a dude and had nothing to do with coffee.