The Dreamcast was the best and last console Sega ever made. Its short life of less than three years on the market (originally released in November 1998) was marked by good reviews for the console itself and many of its games. None of this was enough to make a difference, especially against the onslaught of the PlayStation 2.

In the aftermath, a cult following for the Dreamcast grew, and rapidly alongside it came a homebrew development scene determined to give this still technically powerful console a second life.

Cryptic Allusion helped pioneer and foster the Dreamcast homebrew scene. The founder of this firm, Dan Potter, was influential in creating KallistiOS, an unofficial toolkit that helps programmers write code for the game console. (Today, KallistiOS is maintained as an open-source, free software project by a team of volunteers.)

In 2001, months after Sega officially stopped selling the Dreamcast, Cryptic Allusion put together a disc of Dreamcast games and demos created by themselves and other homebrew developers. This disc, titled DC Tonic, was given away at that year's E3 to critical acclaim.

In 2003, Cryptic Allusion released the game for which they became best known: Feet of Fury, a Dance Dance Revolution clone developed with KallistiOS. Its professional-level production values helped to extend interest in the Dreamcast's afterlife among the homebrew community. 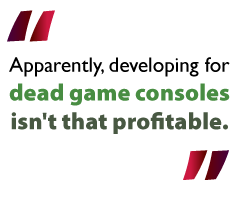 But from that point on, Cryptic Allusion gradually shifted away from the Dreamcast. Activity within the entire Dreamcast homebrew scene was declining, as well. Though Cryptic Allusion is still presently working on a new Dreamcast title, a remake of an Amiga platformer featuring a Samurai duck called Donk!, they have been focusing more on making games for the Mac and Windows. Apparently, developing for dead game consoles isn't that profitable.

Potter runs Cryptic Allusion from Austin, Texas, with his business partner, Roddy Toomim, as an independent game development company that comprises of just the two of them.

The Escapist: What are your technical backgrounds? What do you guys do for a living?

Roddy Toomim: I'm a techie by nature, but I couldn't code my way out of a wet paper bag in a Gulf Coast rainstorm. Dan's the man behind the code, but we've taken on a couple of coder interns in recent months to help us complete Donk!, as well as a couple of art interns.

In real life, I'm a software tester for a company that creates and markets slot machines. I suppose that puts me in the "gaming" business, but not exactly where I want to be just yet.

Dan Potter: I began working with computers when I was about 6, when my dad brought home the "first pieces" from the TI employee store. I haven't really stopped since then; I've been working in the industry professionally for about 14 years now.

My current job is in the transport and analysis of flight data for commercial carriers - think "black boxes" - for accident prevention and procedural improvements [like] more comfortable flights, less fuel usage, etc.