TE: Could you share some advice - technical or otherwise - with others who are interested in homebrewing for the Dreamcast?

DP: Yeah, that and, really, just get in there and do it. There's no amount of book learning or studying that is going to prepare you for it. The more experience you have outside the cushy sandbox that is modern PCs, the better.

TE: What do you think is needed now to help advance the homebrew scene for the Dreamcast?

RT: I don't see the homebrew scene really opening up unless Sega decided to get involved with KallistiOS to help it along, filling in the gaps and, in the process, recreating it as a true dev-kit. I don't see this happening in the near future, but I suppose an old Dreamcast engineer could pop up somewhere. I want to point out that I do not know of anyone out there even considering this. Don't think of it as a rumor.

DP: I don't think even Sega getting involved with KallistiOS would help much. What would advance the homebrew scene for the Dreamcast would be a revival of the Dreamcast itself, and I don't see that happening for another 10 years or so. At that point, it'll be retro and, thus, cool again.

Most people who are interested in hacking on consoles just to hack on consoles have long since moved on to other things.

TE: So would you like to see Sega return to the hardware scene, or see the Dreamcast return in some form?

RT: I would personally love to see Sega return to hardware, but I don't think that will happen for another two or three generations, if at all. 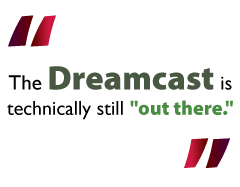 The Dreamcast is technically still "out there" in the few arcades that still exist in this country: You'll find classics like Crazy Taxi, Capcom vs. SNK, and tons more. The NAOMI is the arcade version of the Dreamcast, and it's just a souped-up version of the home hardware. This was Sega's biggest missed opportunity, in my opinion. They could have done what Nintendo was attempting with the Mario Kart arcade game, or Sony's Tekken series, when taking into consideration arcade/home connectivity.

DP: Sega is no good at marketing hardware anymore. Sorry, guys, it's true. The Saturn was a total flop outside Japan, and, while the Dreamcast did pretty good, it got trounced by Sony's PlayStation 2 marketing.

Old consoles had a lot of very custom hardware in them, and you really had to re-learn how to code in a lot of instances. Look at today's console lineup: basically, all PPC cell processors with various combinations of off-the-shelf video hardware and such. Modern arcade boards are more or less just a consumer console crammed into a JAMMA form factor.

So, in that sense, no, I don't expect nor would I like to see Sega return to the hardware scene. I like them doing what they did during the Dreamcast era: making fun games. Hardware is just not all that interesting anymore.

Howard Wen (www.howardwen.com) now regrets having traded in his Dreamcast at GameStop.