Americans are no strangers to the idea of better living through chemistry. We'll try anything to boost our brainpower, from eating more salmon, nuts and avocados to popping potentially worthless ginkgo biloba supplements like candy. And then, of course, there's coffee, the country's black, bitter fuel. Eighty-two percent of us drink the stuff, and over half of us reach for a cup every day.

But what if, instead, we could simply pop a pill to become smarter? A medication that could make us more alert, sharpen our concentration - even make learning easier. Wouldn't we clamor for such a wonder drug?

Imagine the benefits, even just for the gaming community. No more choosing between late-night guild raids or sleep. Laser-sharp concentration for all those Halo matches. Even casual players could benefit, chemically amplifying their alertness while they go for that million-point combo in Bejeweled.

But here's the dirty little secret: The pills are out there, just prescribed for different conditions. Healthy individuals are secretly taking drugs that fix ailing hearts and help kids with ADHD sit still in class, to make themselves smarter.

It's a trend called "cosmetic neurology," a term coined by Dr. Anjan Chatterjee, a neurologist at the University of Pennsylvania's Center for Cognitive Neuroscience. And it's the future of thought. After all, when it comes to being smarter, who wouldn't want an extra dose of genius? 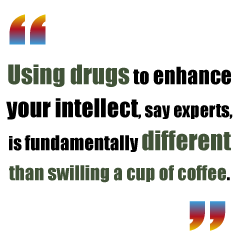 But using drugs to enhance your intellect, say experts, is fundamentally different than swilling a cup of coffee. So-called "smart drugs" or "cognitive enhancers" have "the potential to alter the core of a person's identity by significantly changing her personality," says Richard Dees, bioethicist and philosophy professor at the University of Rochester. That might lead to, as he says, "unexpected effects."

Stimulants - like Ritalin, Adderall and Provigil - are common medications for ADHD and narcolepsy. Although we still don't understand exactly how these drugs work, researchers believe they bind to transport molecules that clear out certain hormones from the brain after they've carried out their functions. Those hormones include dopamine, which effects movement, emotional response and the experience of pleasure and pain, and norepinephrine, which governs attention and impulsivity.

By binding to these transporters, stimulants increase the levels of dopamine and norepinephrine swimming around the synapses, smoothing out any imbalances that may exist. This leads to a "focusing" effect, which reduces impulsive behavior, boosts alertness and improves concentration overall.

Which is probably why students, in particular, so often turn to these drugs. A 2005 survey of more than 10,000 college students found that 4-7 percent had sampled prescription stimulants at least once. At some universities, that rate was as high as 25 percent. "That, in itself, might be an under-reporting," says Chatterjee, "because people might be reluctant to admit they do this."

Use is especially high among students enrolled at competitive colleges, who come from highly educated families and get mostly B's instead of A's before getting pharmaceutical help. "This is a particular population that feels pressured to perform," he says. 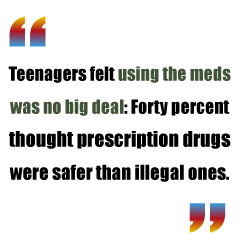 Among teens, the usage rates may be even higher. A Partnership for a Drug Free America study, surveying 7,300 teenagers in grades 7-12, found that one in five had tried prescription stimulants. What's more, teenagers felt using the meds was no big deal: Forty percent thought prescription drugs were safer than illegal ones, and a full third said they weren't addictive.

Students aren't the only group leaning on stims to keep up. Various doping scandals in the world of sports have revealed the widespread use of stimulants, especially Provigil, by pro athletes. Professional poker player Paul Phillips, who's won nearly $2.3 million in his career, credits Adderall and other ADHD medications for his success. Even the military has considered stocking up on Provigil, especially for soldiers in sleep deprivation situations.