We're living in an amazing time for science. The world's aflame with stories about nuclear-powered batteries, levitating frogs, even glow-in-the-dark house pets. And while much of science casts its eyes toward the stars, what's going on down here on Earth is pretty amazing, too. Chronicled here are some scientific feats you may not have heard about. I've split them into three categories - physics, chemistry and biology - for easier reading.

Levitating Frogs
A university in the Netherlands has been experimenting with very high-powered electromagnets. Everything from your mom's favorite tea set to the annoying kid throwing paper airplanes in the back of the bus has a magnetic field, even if it's tiny. However, with enough juice running through an electromagnet, scientists can make anything fly. Take, for instance, the levitating frog, which can surf an electromagnetic wave with the best of them. 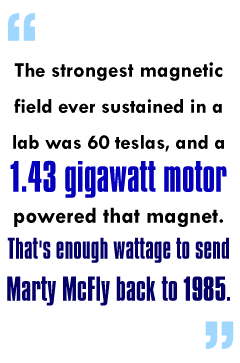 It'll be a while before you can strap on your Magneto boots and take to the skies, though. It takes a magnet with a 16-tesla magnetic field to lift a small frog into the air. The strongest magnetic field ever sustained in a lab was 60 teslas, and a 1.43 gigawatt motor powered that magnet. That's enough wattage to send Marty McFly back to 1985.

Nuclear Batteries
The University of Rochester has issued a press release stating that, using existing technology, they have developed a battery with a 10-year lifespan. Gone will be the days of worrying about your laptop charger on business trips.

The theory is the silicon in the battery will capture electrons expelled from a radioactive gas to form a current.

What has held these batteries back in the past was the little amount of current they provided. Due to the nature of radioactivity, half the electrons chucked out miss the silicon altogether. It's rather like the sun: It emits a hell of a lot of thermal energy, but only a tiny portion hits our planet.

The University of Rochester plans to increase the silicon's surface area in order to catch more electrons. To accomplish this, they have designed little pits in the silicon, each around 40 microns deep. The researchers are proposing a 1,000 percent increase in the amount of energy the silicon can capture, but, in time, they think they can achieve a 16,000 percent boost.

Since protecting the environment is in vogue, better batteries are a huge step in terms of energy efficiency, though there are certain human health issues to address given the material involved.

Anti-Gravity Water
Water, one of the most abundant substances on the planet, is still a scientific puzzle.

Scientists from the Graz University of Technology in Austria discovered that when they subjected two beakers of water to high voltage, the water climbs the side of the beaker and joins between the two, forming a bridge. The voltages involved are huge, which causes the water itself to heat up, and after about 45 minutes the bridge will collapse due to the heat. However, during those 45 minutes, the researchers managed to extend the bridge to 25 mm!

Letters to the Editor: Weird Science The Escapist Staff 0 Comments