It's not enough to kill the old myths and legends. You gotta choke 'em by their own entrails, cut their heads off, burn the body, then scatter the ashes far and wide, like a pestilential carpet.

This is how to improve videogame journalism.

Ancient rulers from Indus to Sumeria knew the power of godhood lay in death and fertility - the ability and the obligation to heal the land by dying. The king would go with his servants to a great tree by a crossroads. There, lashed to the trunk with cruel straps, he would hang, deprived of water and food and comfort, left to the elements for nine whole days while his own meat broiled in the afternoon sun.

The king would die. The harvest would come. 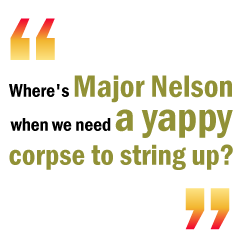 So where's Major Nelson when we need a yappy corpse to string up? Yahtzee, are you free Wednesday?

Writing about videogames is like writing about food, sex or drugs - why don't you just go do it already? And as an art form, work form or whatever, videogame journalism is the young kid on the block. People have been onto politics since The Daily Cave-Drawing; war coverage predates Homer; hell, even auto journalism's got more than a century under its belt. Our thing, it's still new. It's awkward and a little pimply. And it falls prey to some pretty naive traps, like being surprised when advertisers act like advertisers and try to throw their weight around.

You know what? I like it this way. I love that videogame writing isn't yet completely encrusted in dried horseshit. I love the foolish idea that it doesn't have to be like all the rest. That we get to take full advantage of the new tools, ideas, social structures and power shifts the world has given us in the last 15 years, and we get to create our own myths, legends and kings.

Then we get to hang 'em on the tree and see how they squawk.

But can this stuff handle it? Is there any point? After all, it's just games.

I love you with all my rocket launchers
Fifty years ago, it was just music. Popular compositions and the beginnings of rock 'n' roll. You could read all about the clean-cut, good livin' boys who sang those peachy songs in 16, 17, Marilyn, Roxy, Valentine, Teen Scene and others.

They're a real hoot, those 1950s teen music mags. Gushing reviews. Endless top-10 lists and "this month's best prom date." Wading-pool-shallow interviews with creators and idols. A pervasive sense of total amnesia, where anything older than six months belongs to some foreign country no one has ever visited.

On the other hand, you've got the fantastically wayward things written by the squares, eggheads and college professors trying to understand this "popular" thing and put it into proper perspective. Horrid pontifications in places like Time and Newsweek. The English novelist Colin MacInnes, poor guy, in a 1958 issue of The 20th Century tried to wrest deep philosophical meaning from the lyrics "I love you with all my heart / And I hope we will never part" in Paul Anka's "Diana."

Teenage amnesiacs on the one hand, pseudo-intellectual wankers on the other. It sounds familiar, somehow.

The music evolved, and the writing evolved with it. That cow-lick kid with the hips, some long-nosed git from Minnesota and a whole bunch of other people showed up. There were new things to write about, not least a decade of war, assassinations and other social earthquakes that all seemed tied into the art and entertainment forms somehow.

Critical Intel: Dear Everyone: It's All Going to be Okay Robert Rath 36 Comments