There are six of us around the table, and the conversation turns to what I do for a living, also known as "my field of study" in academia. "I'm a game designer and a professor," I say. The dinner had been arranged by a third party in order to connect academics from various institutions for networking purposes.

"You mean videogames?" one of the teachers asks. It's said with the same professional and courteous tone that one might reserve for asking, "Did you pass gas?"

"Videogames, yes," I answer. "I've been doing it over 20 years now." Really without any effort at all, I launch into a little love manifesto of sorts, talking about how much I enjoy being a game designer, how wonderful it is to make games, all kinds of games. I even tell them about the incredibly wonderful modding experience I had with my 7-year-old daughter. "I am teaching her to play Risk," I tell them. "And when I told her she couldn't own the oceans, she said, 'But, Mommy, you're a game designer. You can change the rules!'" We did, and it made the game a whole lot different, and the best part about it was that we made our first mod together. It was a wonderful, geeky moment that perhaps only another game designer parent can appreciate.

Inevitably, after I finish speaking, the strong opinions come. It happens the same way every time: People listen and then they say what they've been feeling. Videogames are not good for you. Videogames are a waste of time. They isolate children. Kids never go outside to play. They just sit there and stare at the TV all day.

The conversation this evening is particularly ironic, given that I've just finished my design for GDC's Game Design Challenge, OneHundredDogs.com. It's a Facebook ARG designed to be played in 50 cities across the country. It's all outdoors and designed to build a nationwide community of happy people and their happy dogs working together toward a common goal. I sit and listen, and they continue. 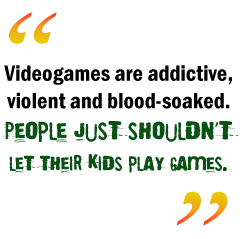 Videogames are addictive, violent and blood-soaked. People just shouldn't let their kids play games. One attendee agrees with the next, polite apologies are made in my direction and the memes pass around the table with the bread.

On the way home, I wonder where the hell all this comes from. These are the same people who drowned machines in quarters back in the 1980s, who played Super Mario Bros. until their thumbs were sore. I know, because I was there. I bet some of them even had Pac-Man lunch boxes like I did. So where's the love?

Within the hour, I send off an email to 40 people over 30 who aren't gamers. "Just off the top of your head, what would you say if someone stuck a microphone in your face and said, 'How do you feel about videogames?'"

The emails are written (in my head) before I even receive the first reply. Some will note their dislike of videogames and back their opinions up with references to Jack Thompson and Dr. Phil or the plethora of news stories that tout videogames as vile things. The rest will like them, slaver about the Wii or state indifference.