Kaori's elbow brushed alongside Eric's, expertly demonstrating platonic support. Such incredible intuition. Moving like a specter, she'd marshaled the most imperceptible techniques to make her presence felt without interrupting or startling people. Eric didn't look away from the white sky when she spoke. 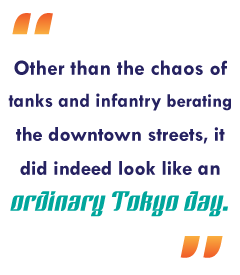 "It feels cold for such a nice day," she offered. Other than the chaos of tanks and infantry berating the downtown streets, it did indeed look like an ordinary Tokyo day. Eric hummed in reply, but said nothing. He knew why it was cold. It was the same reason there were no birds. The thought broke his reverie.

Looking down at the throng of people watching the army barricade the long, straight street below, Eric could see cyclists breathing on their cold hands in confusion, and inadequately clothed children huddling close to their parents for warmth. The cold was falling from the troposphere, through vortices created by the descending ship's braking thrusters. The invasion fleet was approaching Earth at incredibly high speed, and had fired its powerful decelerators as it entered the bottom layer of atmosphere two hours ago.

They'd been waiting for the signs for weeks, but it still caught them off guard. Eric's team wasn't finished building the weapon. The incomplete calculations began racing through Eric's mind again.

Kaori registered the change in his face, and understood there was no longer any need to fortify his emotions with kindness. It was time for business.

"General Nishikado's waiting in the hanger. The tracks will be laid in a few minutes, and the weapon will be ready to drive." Kaori spoke neither officiously nor friendly. That's why Eric relied so heavily on her to deal with his administrations; she handled facts like a magician handled coins.

"Then I guess it's time to play. Run me through the targeting protocols again as we head downstairs please, Kaori," he said, staring at his shoes as he set a quick pace toward the elevator. It helped him avoid distractions and concentrate on his thoughts, although his mother had always chastised him for it. Maybe she'd have the opportunity to rebuke him again, he mused.

Nishikado stood in the narrow hatchway of the rail cannon, his brow furrowed. He leaned heavily on his walking stick as he turned around inside the doorway to look at the approaching engineer. The general winced, invisibly, as he studied the bedraggled, washed-out man approaching him. Furrer couldn't even make eye contact with his colleagues; how was he supposed to look into the eyes of a merciless alien enemy? Fifty years of military discipline kicked in, and Nishikado buried his disgust deep inside his ordered mind.

"A fine weapon, Dr. Furrer. I have every confidence it will bring us honor during our final stand." This micro-speech wasn't directed at Eric. It was meant for the whole hanger, and Nishikado's commanding voice carried to every distant corner of the makeshift base.

Eric's reply was meant only for the old soldier. "It's going to be cramped inside, General. I hope you've studied the design brief, because there won't be room for me to operate everything. If you're at all unsure -"

"I was controlling weapons while you were still chasing around the yard with a toy ray gun, Dr. Furrer." Not a trace of fury could be heard in Nishikado's voice, but it was there. Burning deep below the surface - anger so powerful it eclipsed the rail-mounted terawatt laser cannon Eric had spent the last six months building.

Eric checked his sarcasm and reminded himself of the general's burning desire for the honor he was robbed of years before. Eric didn't share Nishikado's thirst for vengeance against an enemy long since conquered - he fully intended to survive this ordeal. If anyone else was capable of working with the incomplete weapons system, he'd have gladly stepped aside.

The Dark Side Spanner 7 Comments