They pulled him out of a civvie MMOG and gave him a multimillion-dollar fighter jet because he matched a profile: youthful reflexes, controlled aggression, a healthy dissociation from the game itself. He didn't go on tilt.

I had demonstrated how important it was to find pilots who could disconnect. When I lost my first jet to automated flak turrets in a Eurasian red state, I busted my control rig. It was that a computer beat me, I think, that got me so pissed. I kept picturing my plane disintegrating like a flicked cigarette, orange bits arcing down over blackened hills. Back in the day I used to bust controllers on my Xbox Infinity, too, but those weren't custom-designed, user-responsive remote-piloting apparatuses ("Reps," the tech guys call them). It took them two weeks to fix it, but it could've been one. They just didn't want me at the kit for a while. 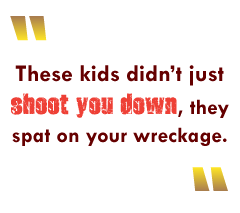 He was brought on right after that. Part of a fresh crop selected off leaderboards and blind multiplayer challenges. Pit a ballsy civilian against an anonymous UAV pilot and see how he does. It's a fairer fight than you might think. Don't tell them they're in a multiplayer duel with an Air Force pilot, and they bring the same level of play they can manage day to day. This last crop of newbies could've gone pro. These kids didn't just shoot you down, they spat on your wreckage.

So when it was time to hand down call signs, we named him Griefer.

To get them up to speed, they paired each newbie with one of us from the senior classes. I got Griefer.

He was what you'd expect: 12, angry and arrogant, dressed in oversized clothes wired for sound. I don't think I had a single conversation with him when his eyes weren't on the phone around his neck. Signing bonus.

Our first mission was against guerilla UAVs in South America - drug-funded, very quick. The pilots were probably hopped up on designer speed. We had Red Bull.

Cartel planes are cheap, sold by the dozen out the back of Malaysian factories. But they're plentiful, and painless to lose. Inside three minutes, a pilot can log into a new plane and be pushing the fight. They're little guys, not the boss battles you face in Eurasia, and our scores were great. CNN put us in the top 10 percent that week. Our footage was a top download for 36 hours.

I'm the better pilot, he's the better shot. I'd line them up, he'd take them down with a zen, pinball-hero focus that would've drawn arcade crowds in the old days. A flick of the right-hand stick, a pull on each trigger and they came down like tattered kites. Hardly enough mechanics in those solar things to blow. A tap of the bumper, and he was on the yellow button with two fingers, letting loose streamers of white smoke tipped with tiny white-phosphorous warheads. The colonel was just starting to chew him out for wasting ammo when new spawns were flitting up out of the jungle canopy. The kick of launch gasses drew in Griefer's warheads and the second wave was down before they hit fighting altitude. He was a hotshot and I wanted to hate him for it.

Letters to the Editor: The Fiction Issue The Escapist Staff 0 Comments