The first time I ever laid eyes on a Nintendo Wii wasn't until well after its debut. While I had indeed heard the hype over Christmas 2006 and vaguely resolved to get one for myself at some point, I never got around to actually playing one until a fateful night when Comcast screwed up my friend's Pay-per-view order of Ultimate Fighting Championship 67: All or Nothing and the only thing to keep a crowd of 20 guys at bay was Wii Boxing. While the experience didn't exactly blow my mind, I do recall seeing Diego, one of my training buddies from our MMA club, throwing the same crisp jabs and hooks he had caught me with so many times before in real life, and thinking, "Hey, that actually looks like it works."

The premise behind exercise games - "exergaming" - is fairly simple: Let people play videogames that use their whole body as an input device, and they'll have fun and get their daily workout at the same time. Sadly, something so simple has rarely panned out. The history of videogames is littered with all kinds of bizarre exercise paraphernalia that failed somewhere down the line, perhaps because the hardware was imprecise or the games simply weren't fun, but probably most often because, even in the comfort and safety of our own living rooms, we just felt a little bit ridiculous. 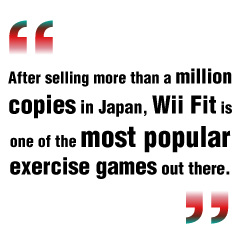 Nintendo's Wii Fit represents the latest in exergaming. Released in December 2007 in Japan (and due for an April release in Europe and a May release in the U.S. and Australia), it uses a special peripheral, called the Balance Board, that uses sensors to determine the player's position by measuring how much pressure he's putting on the board. These inputs are then used for various mini-games that comprise an exercise regimen; games that have your Mii doing various yoga poses, step aerobics, jogging, tightrope walking and all sorts of other activities that test your muscle conditioning, aerobic ability, balance and so forth. It's fair to say that, after selling more than a million copies in Japan, Wii Fit is one of the most popular exercise games out there.