I have the iPod with me, but it's less and less useful every time. Colin Running takes concentration, forces you to open up and listen to the landscape a bit. Like the earthworm echoes of the old Jewish cemetery on the left, shifted across Wellington when the gravestones and corpses got in the way of the Hutt Road motorway.

Down onto level ground, and the blood's hitting my legs. Looming ahead is a long road full of parking meters. As I pass each of them I do a little push-jump-plant-turn thing that works about three quarters of the time. The failures look like someone with a hangover humping a metal post.

By the end I can nearly see the railway station. Sea air from the harbor wafts by. The Sunday morning grogginess has gone, and I'm ready to vault some rails, climb some walls, defeat the city at its own game.

The fear rises like bile. Am I getting points for this on some grand cosmic scoreboard?

It's All About The Numbers
Like any sports fan, I'm addicted to numbers, statistics and replays. Watching the Green Bay Packers last year (yes, we get bits of the NFL here at the end of the earth), I followed Brett Favre's touchdown/interception ratio as it crept above 1.5. Then I kicked that number to the curb in Madden. I'm on 92 percent completion in San Andreas. When I play Halo 3 I realize that having 10 skill and 61 EXP after 316 games means I shouldn't quit the writing gig anytime soon.

Game saves, replays, different camera angles, service records: Everything I do as an online sportsman is there forever. I'm as immortal as Muhammad Ali or that guy they locked up in the Great Pyramid. I even have my third round knockout of Mike Tyson as a desktop background. 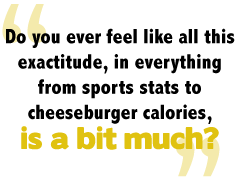 But do you ever feel like all this exactitude, in everything from sports stats to cheeseburger calories, is a bit much? Oppressive, even?

Colin Running is damn near the only thing in my life that can't be measured or digitized.

Except that I'm a videogame addict and I can't help bringing my habit along with me.