Then I ran into Lee.

Lee was five foot nine, 280 pounds. He had a barrel midsection, tree trunk arms and a massive surplus of blubber on top of the muscle.
Lee was direct. He'd charge right in, haul you to the ground, maul you like a cave bear.

I got good. I could hold Lee's mass off me and threaten to retaliate. I was getting somewhere. Skill was mastering power.

Lee went to Lee Plan B. He moved forward. Hovered above me. Grabbed, with an audible squelch, a handful of his own chest fat then lowered the whole writhing mass onto my face. 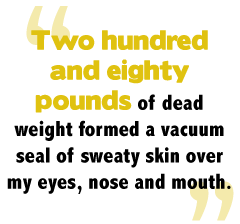 Two hundred and eighty pounds of dead weight formed a vacuum seal of sweaty skin over my eyes, nose and mouth. My world became chest fat. I couldn't breathe, move or believe it was happening.

Acrid sweat entered my ears. I tapped to the most brutal submission hold the world has ever seen.

I don't think I was cut out for cage fighting. This "real world" thing is overrated sometimes.

The Hikitia
And so here I am, hanging above Google Earth point 41-17'21.19" S x 174-46'49.46" E, a meeting of ocean, urban design and sky. Ninety years of history on the deck below me, 28 years of sports memories behind, brain chemicals firing and flashing in configurations they've never known back on the couch at home.

The Hikitia came out of Scotland in 1926. Its coal-fired boiler hauled it back and forth across Wellington Harbour and into the Cook Strait, where its great crane would move cargo, perform rescues, even lift entire ships clean out of the water and onto land, away from the clutches of Tangaroa and his tantrums.

They used to play sport on the deck - rugby, cricket and wrestling - while they waited for another call from the harbor master.

The Hikitia is old, rusty and for a while, was nearly forgotten. But a small group of engineers, enthusiasts and seafarers took her back with love, moved her to berth and swarmed over her on weekends, checking the engines, fixing the oil, looking at pieces of salvage in a tiny lab below decks.

I don't know if they planned for someone swinging off their 90-ton crane.

Everything is combining. The digital overlay and the gameplay and the twitch-response and the fear and the manifold viewpoints and histories of this place. Virtual and real are building and enhancing each other in a way my 3-year-old reptilian brain could never have imagined.

Finish Line
Sports fields, real and virtual, are some of the most recorded, photographed and observed places in the world. Just like the centers of modern cities.

We've made free running and fighting into YouTube events, an excuse for laughing at idiots and maniacs.

On a good Sunday morning in the Southern Hemisphere, I get to limp back in the front door. Stretch. Hot shower. Chocolate. Back to the warm comforting bath of all that information and measurement, maybe a game of Madden and then some rounds of Big Team Battle. My nerves are still firing, and my muscles can feel it. Everything is filled with surging chemicals.

Come on. Really. This is a great time to be alive.

Colin Rowsell is a writer and strategist working out of Wellington, New Zealand. Talk to him on [email protected].