Fear keeps its own scorecard. And it sure scratches the tally in some biologically sensitive places.

Hanging 60 feet above Wellington Harbour, my neck constricts and just for a second I remember cage fighting. The triangle choke. Thick rough legs wrapping 'round your carotid artery and squeezing. Black spots in your vision, stomach, groin.

The Hikitia, a floating crane ship, is 92 years old. Struggling to hold on to her is exactly like the moments before being choked unconscious. Worse because you can't submit. No gentle little tap-out on someone's knee. There's staying awake or there's the ground. I wonder how the hell someone who doesn't like heights ever got here in the first place.

I wonder if history is more painful to land on than steel.

Primordial, reptile-brain chemicals are firing and my arms have started that horrid shake.

I don't think Wellington's had street cameras installed yet. But it's just a matter of time. I wonder if they did a trial rollout near the waterfront. If this most private and unscoreable sporting moment is going to end up like all the others on YouTube.

I really should have stuck with climbing in Assassin's Creed. 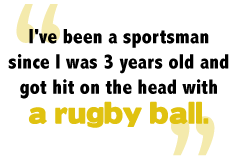 The Greatest of all Times
I've been a sportsman since I was 3 years old and got hit on the head with a rugby ball. This is a rite of passage in New Zealand - if you haven't lost at least a few brain cells to the Great Game, you're a bit funny. Possibly a girl or a terrorist. Highlights of my brilliant career include over 100 twisted ankles in basketball, being on the wrong end of a cricket bat to the groin and the horror of the Large Sweaty Fat Man cagefighting incident (more on that later).

Virtual sports kicked in at age 4, when I found Microsoft Decathlon. I got my fingers stuck in the gap between the arrow keys and never looked back.

Now, a quarter of a century later, as I head out my side door down the shaggy staircase, the two sports worlds are about to collide. The greatest 3-year-old rugby ball stopper in history has become a fully digitized, individualized and slightly pungent man.

This is Colin Running. The sport of the new millennium. It's Free Running without the athletic ability, Le Parkour without the annoying French philosophy.

I knew I'd be world champion someday.

Heading Out
I usually start first thing on Sundays, before the city has recovered from Saturday night.

Along the path from my house are some wooden railings that I try and monkey-swing down. This doesn't work well because my body still can't believe I'm not in bed, but it gets me onto Tinakori Road and near the next drop.

Tinakori Road used to be the Wellington Harbor shoreline before the earthquakes and the infill, the spot where Papatuanuku Earth-mother handed over to Tangaroa Sea-king. We screwed that bargain over good years ago, and now it's another long staircase down to the flat plain of central Wellington proper.