What Is This Nonsense?
If you've browsed the manga section of your local bookstore, odds are you've pulled out a book that sported a flowery cover with soft pastel colors and a pair of attractive young men. They could be high school students, college slackers or businessmen; they might hold hands, snuggle or pose suggestively.

And if you flipped through the book, you might already have an idea of what yaoi is. For those of you who put it back on the shelf, yaoi is a popular subgenre of girls' manga that features men in romantic relationships with each other.

Confused? You're not alone. The media, men and marketers alike are all trying to make sense of the yaoi phenomenon, whose fans are so devoted that there are two yaoi conventions in the United States alone, and it seems like every Western manga publisher issues a few volumes of BL ("boys love") a year, unless, of course, they only publish yaoi.

The word "yaoi" (officially pronounced "yah-oh-ee," but actual pronunciation varies greatly) comes from a Japanese acronym for the phrase "yama nashi, ochi nashi, imi nashi," which roughly translates to "no climax, no resolution, no meaning." The phrase wasn't necessarily coined only for male/male romance stories, but it eventually took on the meaning as the fandom evolved.

The word is mostly not used in Japan in favor of "BL," but English-speaking fans use the term as a catchall for BL works originating in or inspired by Japan. In fact, Western fans sometimes distinguish "yaoi" from what they call "shounen-ai," which translates literally to "boy-love." In Japan, it refers to a long-defunct manga subgenre that featured young boys, but English-speaking fans sometimes use "yaoi" for hardcore pornographic works and "shounen-ai" for non-explicit titles. 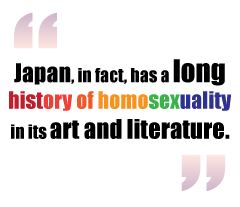 The exact development of yaoi is something of a mystery; Japan, in fact, has a long history of homosexuality in its art and literature. But sometime during the 1960s or '70s, fan-made comics featuring the men of popular manga series in romantic relationships with each other began appearing.

Not long after, artists began creating their own original yaoi manga, and in 1978, yaoi had its very first monthly manga anthology, titled June. Now a dozen or so yaoi publishers exist in Japan, and more than a handful in the U.S. license Japanese works or create their own.