Tales of boys in love was never exclusively a Japanese phenomenon, however. In fact, the western "slash" movement - which consists mainly of fan-fiction and art featuring men from such series as Harry Potter, Lord of the Rings and Pirates of the Caribbean - established itself separately, although similarly. Slash's roots can be traced primarily back to Star Trek: The Original Series, which inspired many fans to wonder if Kirk and Spock had a more intimate relationship than the show let on.

Although there are some male readers of yaoi, it is by and large created by and for women. As such, it's an entirely female fantasy of homosexual sex, and it often resembles heterosexual sex more than homosexual in its depictions. As such, it's not "gay manga," and the effeminate styling and unrealistic portrayals of homosexual life turn off some gay men.

What's In This Stuff?
Yaoi's content varies widely from book to book. Some titles may feature a simple romance, such as Satoru Kannagi's Only the Ring Finger Knows, which tells the tale of a couple of high school lads who fall in love but have trouble with their own insecurities about their romance. The series features no hardcore scenes, which isn't uncommon in yaoi.

And yet, for every Ring Finger there's a series like Tokiya Shimazaki's Love is Like a Hurricane. Hurricane explores a similar theme, but the boys' love initiates in a particularly lustful manner, and their adventures are far more explicit. 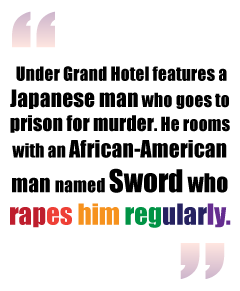 Mika Sadahiro's Under Grand Hotel features a Japanese man who goes to prison for murder. He rooms with an African-American man named Sword who rapes him regularly. The two form an unusually deep bond with each other as they deal with the other prisoners and corrupt prison guards. It's an unusually grim tale, but rape and coercion are common in most types of yaoi.

In most hardcore BL, there is a primary couple that consists of two roles: the "seme" and the "uke." A seme is the dominant ("top") character; the word comes from the Japanese word for "attack." An uke (from the Japanese word for "catch") is the submissive ("bottom") character. Some BL writers like to play with these stereotypes by offering up a "bottom" who is more aggressive, or characters who swap roles, but typically a couple will consist of a seme and an uke.