It's no secret that Japan has long been a bit of a joke when it comes to modern music. The phrase "big in Japan" is often invoked to describe a band on the outs, one that has been put out to pasture, sent to play out its remaining days as an imported curiosity.

Until recently, Japan's music scene was viewed as quaint and delightfully out of touch with more "mature" Western trends. The first image most people get when thinking of music in Japan is a group of Stray Cats wannabes with slick pompadours, or maybe some strange novelty act spouting broken Engrish phrases and wearing funny costumes.

But times have changed. Sure, there is still a limitless supply of the strange and the weird radiating out from the East, but lately their underground and indie rock scenes have exploded. Rap and hip-hop have grabbed hold, and you'd be hard pressed to find more intense hardcore and experimental bands anywhere in the world.

While America may be a melting pot for humanity, Japan is the witch's brew of pop culture. Japan has a knack for assimilating new ideas and applying them into their own rich history. This is arguably best displayed in their music scene. On the surface, it may be easy to write them off as aping Western bands, with their artists settling for being the "Japanese Weezer," the "Japanese Iron Maiden" or the "Japanese Kanye West." Obviously there will always be those bands that latch on to a sound without any understanding of how it's derived, but this is certainly not a phenomenon unique to Japan.

These days, it's more common for a Western band to begin its career in Japan than end it there. The West often looks to Japan for the new and the now. Becoming big in Japan is now a mark of pride, proof that a band is ahead of the curve and much closer to the cutting edge. 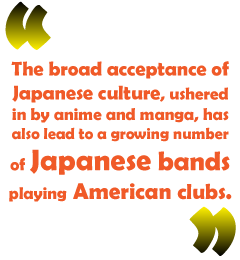 The broad acceptance of Japanese culture, ushered in by anime and manga, has also lead to a growing number of Japanese bands playing American clubs. The huge industry festival SXSW hosts Japan Nite every year, showcasing many upcoming Japanese acts along with some road-weary veterans. American record labels (or at least distributors, which these days are essentially the same thing) are signing Japanese groups left and right. And anime conventions have always been a prime venue to see the bands whose songs bookend fan's favorite shows.