With all of these factors in mind, here's a look at 10 bands from Japan with a chance to make it big in America. Each band is listed along with a few points:

Experience - are they new to the scene or have they been building a fan base for years? Can they even play their instruments?
Exposure - do they have major label backing? TV-play via anime or videos? (Pro-tip: America doesn't really care if you're big in Japan. What have you done for us lately?)
Novelty - face it, people expect something "different" from Japan. Cute, bizarre or extreme, something has got to stand out.

On to the bands!

Abingdon Boys School
Experience - Medium - While full of veteran players, the band itself has only been together for a couple years.
Exposure - Medium - The band really worked the anime and videogame angle, appearing in many fan favorites.
Novelty - Medium - As their name would suggest, they dress in English schoolboy uniforms and goofy glasses that certainly attract attention.

While they may have a rather silly look, these guys can rock hard. Made up of some top players and producers, they write deceptively complex songs, presenting them in an easy-to-swallow pop package. Unfortunately, pop idol singer TM Revolution has said he'll be focusing on his solo career for awhile, so the band remains in limbo.

Boris
Experience - High - These guys have been around for a long time, released a huge discography and worked with many big names.
Exposure - High - Through relentless touring, Boris has made a name for itself across America.
Novelty - Low - While the players themselves are about as low-profile as they come, it's the band as a whole that makes a lasting impact. 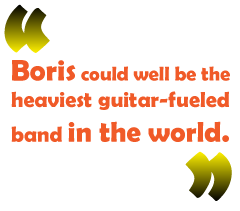 It's certainly debatable, but Boris could well be the heaviest guitar-fueled band in the world. Add the fact that their lead guitarist is a woman and just about everyone snaps to attention. Whether creating sonic hell-scapes with Merzbow or covering '70s era folk tunes, Boris is the definition of heavy rock 'n' roll.

Cornelius
Experience - High - Before becoming Cornelius, Keigo Oyamada was a member of the highly influential band Flipper's Guitar
Exposure - High - Of all the bands on this list, Cornelius is easily the most likely to be familiar to American ears.
Novelty - Medium - His style is a bit quirky and experimental, though in a quiet way.

After signing to Matador in 1999, Cornelius' career took off around the world. With tours and heavy exposure in the American press, Cornelius is practically an honorary American citizen. In a way he has already made it big in America; it's just that no one has told America yet.