Electric Eel Shock
Experience - High - They executed a self-funded tour of America and Europe, and just about every major rock magazine loves them.
Exposure - Medium - Distributed by American digital label JapanFiles.com, they have a very strong foundation to build upon, not to mention legions of fans.
Novelty - Low - These guys are a no-frills hard rock band.

This list would not be complete without the inclusion of Electric Eel Shock, a band that literally sold everything to tour America. They stick to down-and-dirty classic rock with nothing but leather, jeans and t-shirts holding it all together. They are constantly on the move, with a never-ending tour schedule around the world.

Kiiiiiii
Experience - Low - It's obvious that there isn't a high degree of musicianship here, but that's the point.
Exposure - Medium - They've played SXSW and several other art-house gigs, and the fringe press loves them.
Novelty - Astronomical - If Boris is the definition of heavy, Kiiiiiii is the definition of DIY novelty. 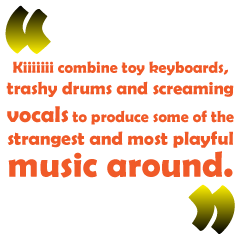 Made up of two women, Kiiiiiii combine toy keyboards, trashy drums and screaming vocals to produce some of the strangest and most playful music around. Many songs will find the girls writhing on the floor or performing puppet shows, perfect for the YouTube generation. Singing in heavily accented English, their songs reference a wide range of American pop culture, from Michael Jackson to Star Wars to the Olsen twins and Full House.

Maximum the Hormone
Experience - Medium - Only a few years with a solid lineup, they are just now hitting their stride.
Exposure - High - They were catapulted to fame when two of their songs were featured in the hugely popular anime series Death Note.
Novelty - Medium - They mix stompy nu-metal with humor and the occasional sugar-coated female vocal.

Much like their name, Maximum the Hormone are a blend of over-the-top, screamy nu-metal with a tongue-in-cheek pop sensibility. While new to America, they recently toured with the Dropkick Murphys and are still riding the Death Note wave as the show airs on American television. They also bring a much needed dose of talent and variety to the nu-metal scene, with their unique singing styles and constant genre change-ups.

Melt Banana
Experience - High - These guys have spent a ton of time in America, playing sold-out clubs full of the most hardcore hardcore-fans anywhere.
Exposure - Medium - They've been together for over 15 years but have a largely underground following.
Novelty - Low - ...unless you count the razor-sharp, speed-rapping/barking vocal style of frontwoman Yasuko Onuki as novel, then it's pretty high.

Equal parts noise and speed punk, Melt Banana are not for everyone. While certainly challenging, they also offer up plenty to hold on to for those strong enough to take a closer listen, earning them a lot of well earned respect from the industry.