The Pillows
Experience - High - These guys have been together for twenty years, and have managed to produce consistently great albums.
Exposure - High - By far they are best known as "that band from the FLCL soundtrack," one of the most popular anime series among American viewers.
Novelty - Nil - These guys are about as plain and unremarkable as they come. 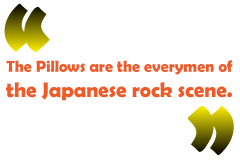 The Pillows are the everymen of the Japanese rock scene. Their sound is straight-up rock - and a bit on the light side - but they can stir things up when they want to. Their biggest drawback is their lack of purely English lyrics, but what little English they use has become very iconic among the fans.

Polysics
Experience - High - They just celebrated their 10-year anniversary in Japan, and their mastery of their instruments is impressive.
Exposure - High - One of the bands on the first MySpace music tour in America last year, they also released a compilation album on MySpace records. Their music has appeared in two anime shows, and front-man Hiro had his own TV show in Japan for a time.
Novelty - Extreme - Not only does the entire band wear matching brightly colored jump-suits, but their cyclopean sunglasses have become almost as iconic as Devo's red flower-pot hats.

Polysics are a spastic new-wave band that, while loaded with geek appeal, easily cross genres and reach a wide range of music fans. They sing about 50/50 English vs. Japanese plus a "space language," so everyone is on equal footing. It helps that they have the chops to back up their over-the-top live performances.

S.K.I.N.
Experience - Nil - They've played only one show and have yet to release anything on CD, but each member is considered a master of their chosen instrument.
Exposure - High - Just about every J-pop fan in the world knows about S.K.I.N., as the band is made up of four of the most popular male Japanese pop-rock stars.
Novelty - Medium - The idea of a super-group is nothing new, but seeing these four superstars interact, and watching the fan-girls squeal, can be pretty amusing.

While it's true that S.K.I.N. has played only one show, it was not only English-heavy but played in America. The fact that they could have sold hundreds of thousands of tickets in Japan, yet choose to play an anime convention as their debut, points to a very high chance of a strong push in America. Plus mastermind Yoshiki, also the drummer for mega-band X-Japan, lives in Los Angeles part time. You can't get any more American than that.

Zac Bentz is a regular writer for Japanese culture site Japanator and runs his own Japanese music blog ZB's A-Z of J-Music. He's also the drummer and mastermind behind the band The Surfactants. He lives in Minnesota with his wife and pets.