"Careful of what you say; children will listen." Stephen Sondheim, Into the Woods

Every society makes raising its children a priority. This means different things to different peoples, however. Each culture tells children what to be, both explicitly and subtly - parents tell their children to share, teachers order their charges to speak quietly and older siblings serve as role models for their little brothers and sisters. But there are many other places for kids to learn what to be, wherever they're from.

Most media created for children serves as propaganda as well as entertainment, and one can work backwards from a culture's children's programming to find out how they want their young ones to act. Japan and the United States each have very different expectations of young girls, and by watching animated programs aimed at children, it's possible to divine each culture's ideal girl.

It's hard to find Western programs that are equivalent to Japanese "magical girl" anime, in which young girls with supernatural powers fight super villains. In terms of American programs, the best matches in tween girl media are The Powerpuff Girls and, to a very limited extent, Dora the Explorer. The greatest obstacle in comparing The Powerpuff Girls to authentic magical girl anime is, well, The Powerpuff Girls is silly. However, the programs deal with similar themes and situations, so we can analyze their cultural messages well enough.

Toughness as an asset is difficult to tackle, but it seems important. The Powerpuff girls - Blossom, Bubbles and Buttercup - are tough, no question: Never out of uniform, they don't brook back sass from anyone. 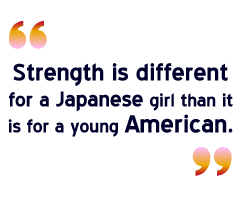 When Bubbles realizes she is considered a much less powerful fighter than either of her sisters, instead of getting discouraged, she goes on a rampage, beating the tar out of litterbugs and jaywalkers. By contrast, magic girls get intimidated and cry. Ahiru of Princess Tutu is told repeatedly that she has no chance with her prince, Mythos, and she accepts this as fact; her friends bully her constantly, and she tends to do as they insist. Toughness in magic girl anime is more complicated than what you'd find in a Powerpuff girl. There's less flash, less overt thuggery. Strength is different for a Japanese girl than it is for a young American; it is the strength to smile while your heart is breaking, to stand by the people you love no matter the circumstances - it is the strength that holds a family (or a team of superheroes) together.

While it isn't technically a magic girl anime, Ai Yori Aoshi is one of the purest examples of this strength: Heroine Aoi has left her family to find the boy to whom she was promised as a child and look after him, never meaning to tell him of what she had given up. Likewise, when Sailor Moon loses a teammate during a fight, she begins to cry, and the villains mock her. This doesn't stop her from defeating them, but it isn't what American audiences expect from a hero. When Blossom, Bubbles and Buttercup suffer a setback, they get mad. Then they get even.

In both cultures, tween girls inhabit a kind of sexual twilight; in either country, it's horrifying when they do have sex. But Japan and the United States imagine (and shape) these girls' desires differently; do they want a kiss, a baby or unrequited puppy love?