I still remember the first day of class. "Where are you?" I text messaged my friend Tuan. "The class is about to start." My friend and I had agreed to take a language course together. At the time we were engineering majors, and we needed to take a couple of language courses in order to meet our general degree requirements. The procrastinators that we were, we had missed all of our chances to enroll in the usual French or Spanish and had to choose between Russian, German and Japanese. It was my friend's idea to take Japanese, and at that moment I was glad I agreed.

In this classroom, there were girls everywhere. They were cute, skinny girls with perfect skin. Some had long black hair, others had blond hair, but each had a bright smile, and I settled in for what I was sure would be my favorite class.

"I'm in class," Tuan messaged back. Just then, as if on cue, an older Asian woman with red glasses walked into the class and wrote "Chinese I" on the chalkboard.

I ran into the classroom next door. It was full of guys wearing anime-themed T-shirts discussing manga. Most of them had neck-beards and glasses, and at least one didn't seem to grasp the concept of deodorant. There were no cute girls at all. Tuan shook his head in disappointment. 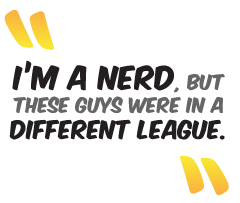 Don't get me wrong, I'm a nerd, but these guys were in a different league. At the time, I had been aware of anime and manga. Like most of the other people I knew, I had watched Dragon Ball Z, Sailor Moon and the other stuff on Cartoon Network. And thanks to Adult Swim, I had even seen Cowboy Bebop. These guys, though, were full-blown otaku. One guy even bragged that he had bought his anime T-shirt in a kid's size because shirts his size weren't available.

For a while, I didn't talk to anyone but Tuan. I had nothing against my classmates, but I knew they were nerds. Not a nerd like me, either; they were pretentious nerds. These guys wanted to learn Japanese in order to become a part of the otaku elite. They would probably leave class, put on costumes and head to an anime convention. They would walk around quoting lines from their favorite cartoons in Japanese, saying, "I watched the original without subtitles" as they looked down their nose at those of us who watched the dubbed version. I wanted no part of this nerd caste system.

After several weeks, they started talking about something interesting. "Man, I just got Katamari Damacy," the guy in front of me, John, said. The game was only a few months old at the time.

"There are so many weird games like that in Japan," John continued. "That's one of the reasons that I want to learn Japanese. I can buy games from over there that we don't get here." He was right and I knew it. Japan was flooded with new, odd and innovative games, and not all of them made it to the states. It was rare that something like Katamari Damacy would hit American shores.