She's pretty. She's pink. And she has no soul.

You know of whom I speak. The strange white cat with the empty eyes, button nose and absent mouth. She worms her way into your heart and never lets you go. 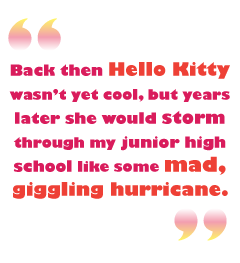 I fell victim to the Kitty at an impressionable young age. My grandparents, the well-meaning fools, exposed me to her in the gentlest of ways. I had scented erasers, pencil boxes, pouches of inexplicable purpose, playing cards - all before I could read or write. Back then Hello Kitty wasn't yet cool, but years later she would storm through my junior high school like some mad, giggling hurricane, and I, laying some rare claim to partial Japanese heritage, was actually ahead of the fashion curve. Sure, I had Kitty stuff. Vintage Kitty stuff.

Despite my later rejection of all things feminine, the Kitty never really let me go. I was in college when the first Hello Kitty keyboard was introduced, and despite my earnest philosophy major, anti-materialism, anti-corporate, anti-the man attitude, the sight of it cast a searing lance of pure commercial lust through my very soul.

The power of the Kitty is undeniable. I knew I had to unlock its mystery if I was ever to truly escape.

Ex Nihilo, Lucrum Fit
The Sanrio Company, founded in 1960 by Shintaro Tsuji, did something most consumer businesses would sell their firstborn for: They created a brand out of nothing. In the '60s Japan was still in the shadows of postwar economic and cultural depression, uneasy with its westernization. Tsuji, raised in this dark period, witnessed the success of Charles Schulz's Peanuts characters and purchased the rights to market Snoopy in Japan. When he saw that brand's success in the hungry-for-hope Japanese market, he set out to create a similarly happy brand and ride what would become Japan's decades-long economic ascension straight to the top.

What started in Japan as a set of basic character designs intended for sale in gift shops - delicately decorated accessories the Japanese call "fancy goods" - broke into American markets in 1976 with a single store in San Jose, CA. And today, using those same characters, including Hello Kitty herself, Sanrio pulls in over $1 billion in annual revenue.

But Tsuji's brilliance didn't stop at simply creating Hello Kitty, oh no. He decided the difficult part of brand building was the tedious process of actually manufacturing product, distributing it, convincing people to buy it and developing ongoing creative material around it. You know, product development. So Tsuji decided he would let other companies do all of that. There were obviously lots of companies producing plain versions of the accessories Japanese women needed for their rapidly evolving everyday life, and he decided he would permit these manufacturers to use the brand that he had created to elevate those goods into the "fancy." For a respectable fee, of course. Although Sanrio for years maintained it would not become a media property, Tsuji eventually allowed other companies to use the Hello Kitty brand to create stories, animated shows and videogames so that consumers would develop a deeper emotional attachment to his products and want to buy them even more.