Game designers come up with ideas every day. Lots of ideas. Sometimes those ideas get pitched. Sometimes those pitches go into pre-production. Sometimes they become full-fledged projects. And sometimes those projects ship. But what most gamers don't realize is that some games get canceled. And every great developer can tell you the story of a project that never saw the light of day.

This is the story of one such phantom title: David Jaffe's Heartland.

"You can just tell when a game you're working on -" Jaffe pauses. He gives the analogy of an airplane, heavily loaded, racing down the runway. "As it gets towards the end of the runway, it's either going to take off, or it's going to go over the cliff or crash into the wall or whatever's at the end of that runway." On certain games, Jaffe says, even with a rough beginning, there's a sense that the plane will take off, even if it ends up needing a bit more runway.

The Last PlayStation
When God of War shipped, it was the most advanced title ever made for the PlayStation 2. As sales rose, so did creator David Jaffe's prominence within the industry. Always outspoken, he now had an audience that followed his every word. He was asked to speak at the DICE Summit. He appeared on an MTV roundtable with legends Will Wright, Harvey Smith and Cliff Bleszinski.

Jaffe received accolades for the game's story and presentation. He recalls a sense of "That's what I do now, so let me keep doing that." But even as production on God of War 2 began, Jaffe knew he didn't want to continue with internal development, something he says was "exhausting and intense." 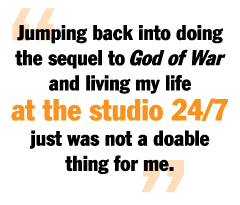 "I was hoping for a more balanced lifestyle," Jaffe says. "The idea of jumping back into doing the sequel to God of War and living my life at the studio 24/7 just was not a doable thing for me."

Going Incognito
That's when it occurred to Jaffe to work with an external development team, in the form of Salt Lake City-based Incognito, with whom Jaffe previously worked to create Twisted Metal: Black.

There certainly was crunch time, Jaffe admits, but he sees subtle differences between external development - which is more about the design sense - and internal development, which is about waiting for code to compile at 3:00 a.m., just to see if the game will work.

"Looking back, I think what should have happened - and one of the biggest lessons for me," says Jaffe, "was that you really have to marry the design with the sensibilities of the team."