"A lot of people stand around and talk about games as art. But when it really comes down to it, there's still a resistance to really let it all hang out and say, 'Look, we're going to tackle subjects that are just as potentially - not intentionally offensive - but potentially offensive and worrisome as film, TV, literature.'"

While Sony had no problem with Heartland's ambitions, Jaffe eventually agreed he wouldn't explicitly name an enemy. This meant Incognito had to substitute generic enemies, something Jaffe says had a good design effect. "It was really something you could project your own thoughts and fears and politics onto." 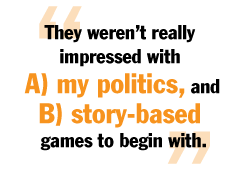 End of Days
Heartland was to be a two-year project, but was only in development for eight months. Jaffe says that it all goes back to the design not being a good marriage with the team, who didn't play that many first-person shooters. "They weren't really impressed with A) my politics, and B) story-based games to begin with."

The team was slowly making progress. They were hard-working and meticulous, but it was clear their motivation was professional, not personal. "Also, the team was spread very thin because we had to keep offloading people from Heartland onto Warhawk."

Heatland's producer would call every day, to report that another team member had been "Warhawked." When you throw intra-office poaching into the mix with a game that the team never wanted to make, you've got a surefire way to "keep that plane from taking off."

"By the end, we were running on fumes anyway," concludes Jaffe. When the team was down to nine or 10 people, producer Scott Campbell and Jaffe discussed how they were going to complete the project. It went from making the game, to whittling it down, to getting rid of multiplayer and finally realizing "the ambition is just too great for the resources that we have."

The decision to cancel Heartland was easy, says Jaffe, because the game never achieved a level of polish such that anyone fell in love with it.

New Beginnings
Campbell and Jaffe then began to work on the PlayStation Network title Calling All Cars. They realized they liked working with a team small enough to know everyone on it, and rallying around a central design. It also led them to consider making smaller semi-casual, semi-hardcore games. "It really was the thing that pushed us out into starting our own company." Today, Jaffe and Campbell run Eat Sleep Play, a studio made up of former Incognito talent with an exclusive three-game deal with Sony.

Speaking personally about Heartland, Jaffe says that he finally got the need to do something more than entertain people out of his system. "For me, it allowed me to see and embrace that - at least now in my career - I'm not only OK, but thrilled to be working towards a Michael Bay version of a videogame maker. I just want to make people happy and entertain people. I don't need to push the medium forward, I don't need to say anything. I really just want people to play the stuff we work on and have smiles on their faces."

N. Evan Van Zelfden expects great things for the future of games. Games are the greatest art form to date, he asserts. This is why he plays games, writes about them, and continues to work in the industry of games.