The splintering of developers is a natural process. Eventually, someone is likely to want to try to strike out on his own, either through dissatisfaction, a desire for more autonomy or momentary madness. Sometimes it speeds up. There are periods when a large, critically acclaimed developer sheds dozens of these seeds. It's normally because they're dead, or as good as. In the late '90s, development legends Bullfrog, absorbed into Electronic Arts, sent a bunch of developers flying. They went on to form Lionhead, Elixir, Lost Toys, Intrepid, Big Blue Box ... but the first shop to come together was Mucky Foot. And, at the time, everyone thought they were mad.

Or at least Gary Carr thought so. Their Bullfrog colleague, Carr was busy finishing Theme Hospital when Mucky Foot was in its infancy. "Bullfrog had basically sold itself to EA, which wasn't necessarily seen as a massively negative thing," he says. "Peter [Molyneux] was making it seem we were all going to be super rich and making these fantastic games - which I think he believed at the time. [Mucky Foot] just threw away those share options. ... You could have at least sat it out for three or four years and have made lots of money." I'm talking to the Mucky Foot primaries, 11 years later. There's an audible pause. "If I'd stayed there, those share options would have been worth half a million pounds," Mike Diskett sighs. "We'd have been wearing hats made of money." 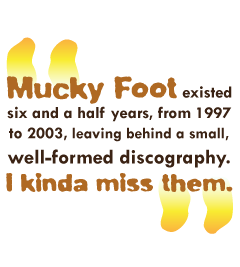 They never got their Penny Arcade-esque money hats. Mucky Foot existed six and a half years, from 1997 to 2003, leaving behind a small, well-formed discography. I kinda miss them.

Founders Guy Simmons, Mike Diskett and Fin McGechie had long considered striking out alone. "We always spoke about it," says Fin McGechie. "Myself, Guy and Mike, as we lived in the same house, worked and drank together [and] after a few beers plans would get made." It came to a head when the project Simmons was working on, the much-hyped Creation, was canceled. Simmons had been chatting to them about an idea for a game - Nanoworld, a god game about microscopic robots - which Bullfrog never actually made. He decided to leave; Diskett and McGechie chose to join him.

For McGechie, staying at Bullfrog was becoming untenable. "The EA rule book was brought in. I remember Gary and myself getting told off for running in the corridors," he says. "That was it for me." In a pub - and Mucky Foot is a developer whose story seems primarily told in pubs - they decided to hand their notice in on a Friday. They'd had enough. "Then, on the Thursday, Guy decided he'd had 'even more of enough' and handed in his notice," McGechie says. "Then myself and Mike did it on the Thursday. By then, I think, everyone had realized." Diskett elaborates, "We'd actually put very little thought into it. It's like they say, ... you spend more time choosing a pair of curtains than you do choosing the house. It was like that setting up Mucky Foot. We went, 'Shall we?' 'Yeah, c'mon.' We went off in great ignorance of what it would entail."