Except right now I'm one of them.

A lot of this comes with the seasons. Wellington, New Zealand, is shifting from its golden, glorious summer into a place you wouldn't exile Mussolini. The winds start howling up from Antarctica. The days become 37 minutes long. Rugby season kicks into gear, and beer-fed savages roam the streets. 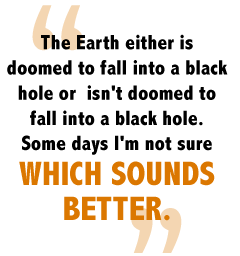 This dark black cloud thing was fun for a while (you can start great conversations on the PlayStation Network), but then it got boring. Being cynical usually does, strangely enough. So I signed up as an amateur gelotologist (I can't believe there's actually a name for it), consulted friends, self-help books and Chuck Norris, then tried six highly recommended things for getting a laugh.

Enter the Temple of Your Body
There are those who would argue for good eating, exercise, perhaps a little resistance weight training. Measured portions of dopamine, serotonin, leafy vegetables and avocado. Maybe, even, following Lara Crigger's excellent research, a regimen of prescription smart drugs tailor-made for my emotional and intellectual needs.

But that's simply not who you're dealing with. Before this writing gig I used to work in government communications, at the meeting point of spin doctoring and bureaucracy. I didn't get through crisis management and deadline madness on rabbit food and pushups. Everyone knows muscle tone's a myth anyway.

No, it's cheese, toast, coffee and vodka for this baby. Besides, climbing a 90-year-old crane ship tower was my workout for the decade.

Wheel in the next one. And it better be better.

Watch the Glory of the World
In 20 minutes of serotonin surfing on Youtube I found:

It's funny, a whole stream of little cackles, but there's something desperately fleeting about these videos. Next week, certainly by next month, everything I'm seeing will be forgotten like dust. It's like going to the theater and knowing every actor onstage will be shot after the curtain call.