You notice something amiss: The Scout is stuck halfway up the wall.

This is problematic. Normally, it'd only be problematic for the Scout. But the wall in which he's stuck is the doorway to the room where the rest of his team are. He's jammed himself in such a way that the door is equally stuck, with a gap that's just too small for the team to escape.

Someone speaks up: "Is he glitched, or is he just being a douchebag?" 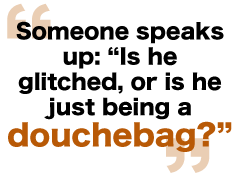 At which point the Scout starts asking general knowledge questions, promising to move if they get them right. Can you remember the capital of Egypt? Where is bile manufactured? You manage to get an answer and ... you're free. The game continues, and you wonder what the hell that was about. The next thing you know, you're taking a cameo role in one of Team Roomba's griefing videos.

In the same way that the sort of hugs-and-kisses type of gamer has found new ways to express his enthusiasm with easily available Internet video, so has the more negative one. Arriving at the initial crest of enthusiasm toward Valve's Team Fortress 2, Team Roomba's video showing an array of petty, hilarious and oft imaginative cruelty was an immediate memetic sensation. Griefing is usually little more than plain sadism; but with the right soundtrack and frame-perfect editing, Team Roomba's videos have turned it into - whisper it - a kind of comedy performance. Or, at least, something other than just being a douchebag.

Chatting to the actually charming Team Roomba in a series of emails, Roomba mainstays Jer (aka Jeremy) and FLOOR_MASTER (aka Ryan) are amused. "It's kind of weird to hear us characterized as doing 'performance comedy' but I think it's fair to say," says Ryan. "I do think there is a difference between griefing to make people miserable and the sort of tongue-in-cheek griefing that was most prominent in our second TF2 video." Just over a year since their first primitive steps into online moviemaking, they now dominate the front page Google search for "griefing video." And they've learned a lot on the way.