As one might expect, the Roomba experience wasn't exactly planned. "ROOMBA as some sort of griefing organization or comedy troupe - however you want to see it - is really a new thing for us. I'm not sure we consider it to exist at that level yet," says Ryan. "To us, ROOMBA is still just a group of Internet Friends who play games together and record said games when we find something funny about them." The group found their origins in the diaspora of culture around goon-central, Something Awful, specifically the Kentucky Fried Server, where they all played Battlefield 1942. They continued, moving onto new games as they arrived. It only became a group in name when they found themselves with the desire to enter a Battlefield 2142 tournament for kicks and had to name their clan. Hence: Team Roomba. "The tournament experience was a fiasco and remains TR's first and last venture into competitive gaming," says Ryan.

The move to griefing videos was prompted by the most dangerous of influences: plain boredom. "You run out of things to do and start looking for unconventional ways to have fun with a game," says Ryan, "There was a long dead time between BF2142 being released and the next big FPS." So, as they waited impatiently while Enemy Territories: Quake Wars, Crysis and Team Fortress 2 inched closer, they looked for other distractions. It was Roomba-ite penifSMASH who made the leap, with a glitch he discovered in Battlefield 2142's Titan Mode. 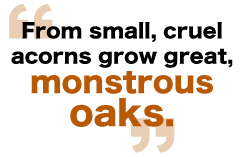 The aim of Titan Mode is to destroy the opposing team's Titan airship, a complicated and laborious process in which you blow up the enemy's reactor consoles to lower the warship's shields before focusing fire on its exposed hull. You can't damage your own team's consoles, but penifSMASH discovered that if you kill yourself, any mines you've laid remain. If your kit is then taken by the enemy, the mines switch side and can be detonated at a safe distance. "So by doing this, we confused the hell out of a lot of people by bringing the enemy Titan's shields down a few minutes into the round when it normally takes about half an hour," says Ryan. They started thinking of other amusing ideas, before penifSMASH began to record and score them. The first was actually inspired by other players' unsportsmanlike behavior in Battlefield 2142, where they flipped on friendly fire and alternately killed and revived players from the offending clan, effectively holding them hostage. To the tune of Bobby Darin's "Beyond the Sea." From small, cruel acorns grow great, monstrous oaks.